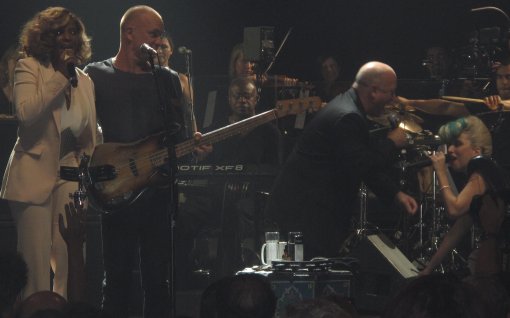 Exclusive: Sting’s 60th birthday party at the Beacon Theater was a four hour celebration of the rock star’s career and songs with his own band and almost a dozen famous musicians performing his music. They included Stevie Wonder, Bruce Springsteen, Billy Joel, Herbie Hancock, Lady Gaga. Branford Marsalis, will.i.am, Mary J. Blige, Chris Botti, Jimmy Nail, and Met Opera star Bryn Terfel. The latter opened the second act of the show with a rendition of “Roxanne” certain to become part of pop history–it was hilarious and serious at the same time, and showed how Sting’s punkiest new wave music has resonance in many forms.

It was family night for Sting, too, with his brother and both of his sisters, plus, of course, the magnificent Trudie Styler (Mrs. Sting) radiant in a slinky Pucci gown, and all six of their kids including Sting’s eldest Joe Sumner, who sang with his father on the poignant “Why Do I Cry for You?” dedicated to Sting’s late father. Also present were about a dozen or so of Sting’s pals from his early days in Newcastle, England including the musicians who played with him in jazz groups like the Phoenix Jazzman and Last Exit.

Some highlights: Springsteen gave extraordinary reinterpretations of  “Fields of Gold” and “I Hung My Head”– so good that he brought out new meanings in both. He should consider recording them. Stevie Wonder, looking slimmer, played harmonica on “Brand New Day” and then sang a gorgeous version of “Fragile.” Lady Gaga wore one complete concept costume at afternoon rehearsals, then came in a completely different one to the real show. She and Sting finally perfected their duet on “King of Pain.” Gaga continues to impress by showing substance–her voice is terrific–over style. “If You Love Somebody Set them Free” was resurrected as a jazz jam, and Sting rendered an acoustic “Message in a Bottle” as a poignant finale.  Robert Downey, Jr, of all things, sang a credible rendition of “Driven to Tears.”

The evening was capped with a surprise for Sting–Styler flew in the 32 member Royal Scots Dragoon Guards–they’re soldiers who’ve completed missions in Afghanistan. She and Sting had seen them this summer in Edinburgh. “They’re incredible heroes,” Styler said, and she’s right. “We’re very proud of them.” The Dragooners’ appearance added a moving finale to an already stunning evening.

Still in all, the evening raised $3.7 million for the Robin Hood Foundation, which disburses funds to impoverished New Yorkers. I’m told that the show was filmed to be part of a free app launching in November.