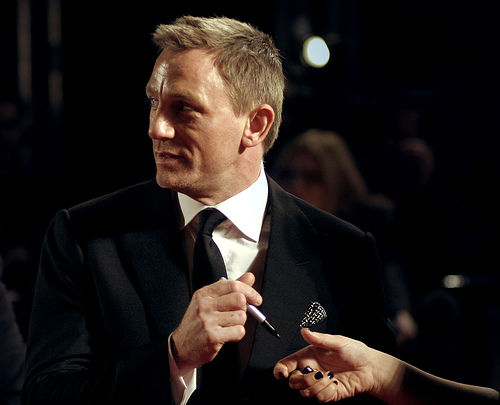 George Clooney might have really been called The Manchurian Candidate last night. He was in China, while New York A-listers got an advance screening of his new– and very well done– film, “The Ides of March.” NBC News’ Brian Williams brought a gang including Rome Hartman, producer of his new show. Regis and Joy Philbin broke bread with Bryant Gumbel, who said he was a little skeptical if he’d like “Moneyball” since he was not a fan of Bill James‘s ‘sabremetrics’ way of calculating baseball. I reminded Bryant that back in (ahem) 1983, he and his old producer covered James a lot on the “Today” show. (He’s going to have to see the movie.)

Elsewhere around Sirio Maccione‘s renowned Osteria del Circo (“Le Cirque Jr.”) were actress Patricia Clarkson, Bob Balaban and wife Lynn, director Barry Levinson and wife Diana, Nora Ephron and Nick Pileggi, doc maker Charles Ferguson, as well as Time magazine big guys John Huey and Rick Stengel. But the big deal was Daniel Craig, who nipped into the dinner briefly, then stood outside and chatted with “Saturday Night Live” creator Lorne Michaels in the damp sorta rain. Craig told me he starts the next James Bond movie next week, which means “a lot of working out.” “Bond 23”–still no name–is what we need now more than ever, frankly. PS Daniel did not know whether the deal was done for Adele to sing the main theme. And I did not ask him about the troubled film, “Dream House,” which opens September 30th.