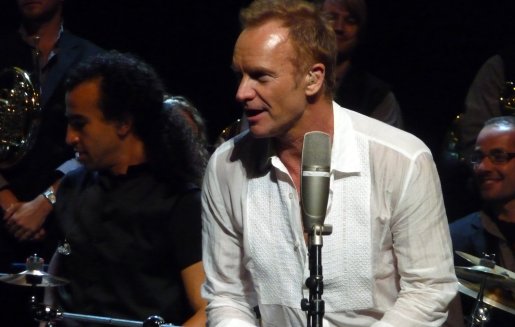 Sting will turn up in the most unusual places if it’s for a friend. And so it was on Wednesday night. The occasion was a 9-11 tribute to the late Herman Sandler, who died in the World Trade Center. Sandler, a philanthropist and patron of the arts, was also a good friend of Sting and Trudie Styler and to the Rainforest Foundation. Stanley Silverman, the respected composer and father of television exec Ben Silverman, wrote a special piece for the evening which was performed by the Kalichstein-Laredo-Robinson Trio. The wonderful Christy Ferer, who lost her husband at the World Trade Center, introduced the program.

Sting first sang a lute song with the trio, then performed his classic “Fragile” with them. It was a moving tribute to an unforgotten friend. Sandler was only 57 when he was killed. Also on hand, in the audience, was Paul Simon, with whom Stanley Silverman has played in the past. Silverman’s original piece, “Les Folies d’Al,” is a riff on Simon’s “You Can Call Me Al.” Another Al–Alan Alda–was in the audience; he’s a friend of the trio. But like almost everyone, Alda was rebuffed by the 92nd St. Y’s uneducated security team and couldn’t get back stage to see his friends.

Niche Media’s Jason Binn and the Wall Street Journal’s Marshall Heymann also just gave up. That 92nd St. Y had better give their staff some of those ‘personal growth’ classes they always brag about!