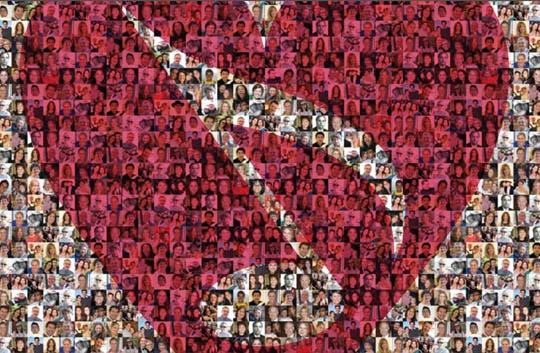 This week is the 25th anniversary of Bon Jovi‘s “Slippery When Wet” album. It’s their seminal work, with “Livin’ on a Prayer,” “Wanted Dead or Alive,” and “You Give Love a Bad Name” all from the same collection. Time flies–now Bon Jovi is well established, and a potential inductee for the Rock and Roll Hall of Fame. The songs lasted because they were good, and the music held up because the players have style, a solid work ethic and excellent hair! Many congrats.

Not only that but menschy Jon Bon Jovi turned himself into an actor, an activist, and a popular figure on the charity front. He’s to be much applauded for unselfishness. Over the weekend, Jon raised over a million bucks in the Hamptons for music education with help from Ben E. King, Alicia Keys, and Jimmy Buffett... This week, ITunes is offering “SWW” for $6.99 and it sounds damn good!…(It’s time for a new album, Jon and Richie!)

…Meanwhile MusiCares’ “Be a Part of the Heart” campaign continues. Sign up now at http://beapartoftheheart.com/  It doesn’t cost a thing. But you could make a donation to MusiCares and send in a “tile” for the big heart. Also at the MusiCares site there’s a great video from Slash explaining how he got cleaned up and off drugs. And there’s info about the new Ozzy Osbourne documentary. When you enter the contest–again, no donation required–you become eligible to win a trip to the 2012 Grammy Awards next February. If you’re a fan of Adele or Lady Gaga, Paul Simon, Elton John and Leon Russell, or Katy Perry, I’d do it because they’re going to be the big nominees. Also www.grammy.com