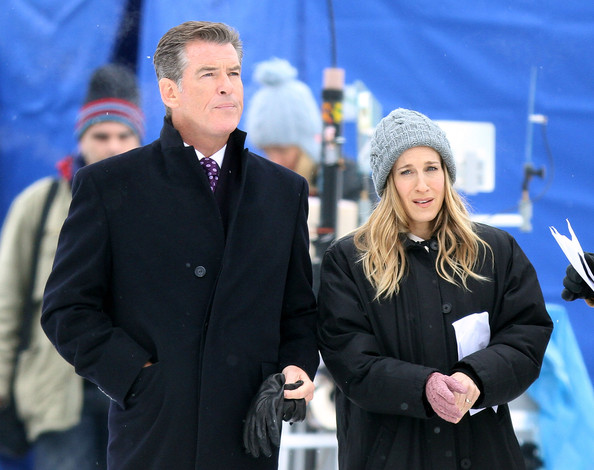 Sarah Jessica Parker is not waiting around for another “Sex and the City” movie. No way. On Friday night in Cannes, SJP– wearing a white Dolce & Gabbana gown with strings of pearls–showed off a lot of clips from her fall film, “I Don’t Know How She Does It.” The occasion was a Weinstein Company party at the H0tel Martinez where movie mogul Harvey Weinstein unveiled highlights from several new films and talked a little bit about some that are going to start production–including David O. Russell’s “Silver Linings Playbook,” which was announced in this column, and Quentin Tarantino‘s new one, “Django Unchained”–with rumored cast members Christoph Waltz, Samuel L. Jackson and Leonardo DiCaprio.

Parker was a little nervous, but it turned out she needn’t have been. Her Doug McGrath directed comedy has an all star cast including Greg Kinnear, Pierce Brosnan, and Kelsey Grammer. Based on the best selling novel, “Don’t Know How” looks like the more grounded sequel to “Sex and the City”–the story of a mom who’s also a high powered professional but not quite getting everything right. The comedy could hit that sweet spot of “The Devil Wears Prada”– not bad.

The other Weinstein Company movie that generated a ton of buzz was “My Week with Marilyn,” starring Michelle Williams and Eddie Redmayne. Williams as Marilyn Monroe just jumps off the screen– she’s got “it.” The whole look of Simon Curtis’s film is sensational, with Redmayne in the “My Favorite Year” role of Colin Clark, Kenneth Branagh as Laurence Olivier, and Judi Denchas Sybil Thorndike. “Marilyn” already looks like a winner, and an award getter–and a lot of fun.

Williams, of course, won’t be Weinstein Company’s only Best Actress candidate. The company just picked up –with Ron Burkle–Meryl Streep as Margaret Thatcher in “Iron Lady.” The $7 million purchase has the Croisette buzzing–this was one of the few powerhouse films available so far. “Iron Lady” could be “The King’s Speech” of 2011.