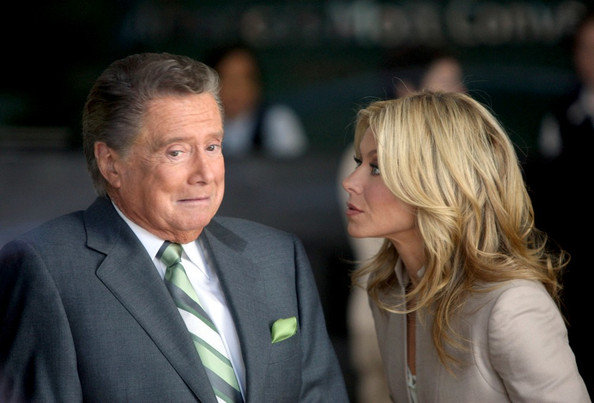 This is the reason I like Kelly Ripa: she told me last night at the Broadway premiere of “The Normal Heart” that her kids don’t watch TV, share a family computer, don’t play video games. Her eldest, Michael, who’s 13, has a part time job in a local shop doing re-stocking. “Michael says, Mom, I’m a dork, and I tell him: one day you will thank me for this.” She’s right, and more parents should follow this example. Kelly was with husband Mark Consuelos; they got their in-laws to babysit. You rarely see them out at night.

Kelly is not at all sure what’s she going to do when Regis Philbin leaves their show next November 18th. Anderson Cooper is out because he has his own syndicated show. And Mark? “That would be like talking to myself,” Kelly said. “He ignores me already.” So it does seem like the affable Consuelos will remain a pinch hitter. I also asked Kelly about the demise of her alma mater, “All My Children.” She gasped with grief. So you get the idea.

Most of “The Normal Heart” party at the Supper Club was concentrated on Ellen Barkin, who received the best reviews of her life in this performance. She’s also received a special award from the Outer Critics Circle. “It’s an easy play to do,” Barkin told me. “I can muster that rage on this issue,” she said, meaning AIDS. She and her agent, Kevin Huvane, did tell me that Ellen had to be forced to take this part. “I cried, too,” she said. Believe it or not, it’s her Broadway debut. But after last night Barkin can write her own ticket on Broadway. So it was a good move.

Besides Huvane, Barkin brought her kids and her pal, young director Sam Levinson, whose Sundance film “Another Happy Day” she produced. Does this eccentric family drama with Barkin, Demi Moore and Thomas Haden Church have a distributor, I asked Levinson? “It does,” he said, but didn’t elaborate.

Lots of other celebs at “The Normal Heart,” including Sarah Jessica Parker and Matthew Broderick, who came to support their pal, actor John Benjamin Hickey. Patty Clarkson turned up with BFF Amy Ryan, but missed seeing the play’s nominal star, Joe Mantello, when she walked Ryan outside to get a cab.

My favorite encounter: seeing Janet McTeer, the much awarded and famed British actress, star here of “Tumbleweeds,” “A Doll’s House,” and “Mary Stuart.” If McTeer put her mind to it, she could win Tonys and Oscars every year. But she’s English, you know, and “we don’t care about awards,” she reminded me. Oh pish posh. In case you’re wondering, Janet just shot a Fox pilot called “Welcome to Bellevue.”

“I told my mother I play the head of the psychiatric ward, and she said, That’s a good role for you. I don’t know if that was a compliment or not,” McTeer told me. In case you were wondering, McTeer’s been stateside a lot lately. She has a nice boyfriend whom she met during the run of “Mary Stuart.” They go up to Maine on the weekends–the same weekends when she could be winning awards!