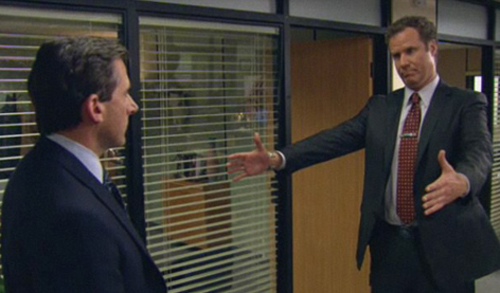 Last Thursday night’s episode of “The Office” was really, brilliant. I just got a chance to catch up with it on Sunday night. Mindy Kaling wrote “Michael’s Last Dundies,” which was essentially a parody of the Golden Globes combined with a send up of “The King’s Speech.” This was also Will Ferrell’s second episode and a huge improvement from the first, when he was introduced as Michael Scott’s successor, DeAngelo Vickers.

I liked that Kaling accomplished a few things here: she had Kelly break up with Gabe (who I’m not fond of). She also continued the thread of Dwight (Rainn Wilson) being angry about being passed over for Michael’s job. Then, after seven years, there were the visits to many of the Dunder Mifflin staff’s homes. Egging Toby’s house was priceless. And then, for some reason, without any dialogue, Jack Coleman, who was once on “Dynasty” and doesn’t seem to age, is sitting at the Dundies. He play Angela’s boyfriend, but what is he doing there?

A few other character bits: after all this time no one knows still what Ryan (BJ Novak) does in the office. In an usual exchange, Kaling threw in a little cat-hiss between him and Pam (Jenna Fischer). Will it mean anything?

But the main thrust of “Michael’s Last Dundies” were the office in house awards, only referenced before several seasons ago. There’s an inside-baseball reference to Ricky Gervais (who created The Office) when Michael says the Dundies are “like the Golden Globes but not as mean.” Indeed, they are just like the Golden Globes with their ridiculous categories and winners. Note: “The Office” loses every year to “30 Rock.” They probably figure what the hell at this point? Then there’s the “King’s Speech” satire–Ferrell with a giant 80s cassette tape Walkman on, volume turned all the way up in the headphones, screaming out his practice lines as co-host of the Dundies. This is Ferrell beyond compare.

And then there’s the ending: the entire cast singing a rewritten version of “Seasons of Love” from “Rent” to Steve Carell aka Michael. If you didn’t know it was TV show, you’d swear they’d surprised him. Carell is genuinely moved. As with the candle scene in “Garage Sale,” this moment is gorgeous without being sentimental or schmaltzy. Kaling nails it.

Now I’ll have to watch Thursday night’s show when it airs.  Michael leaves “The Office” for Holly and Colorado. And no, it’s not The Sunshine State (as mentioned in the prior episode). That would be Florida. Colorado, DeAngelo, is the Centennial State.

Oh, also: Ed Helms can do anything.