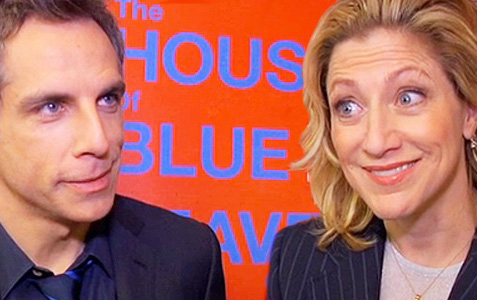 Who knew? Ben Stiller has made so many movies in the last few years, it was all getting to be a blur. But when he opens Monday night on Broadway in John Guare‘s “House of Blue Leaves,” audiences will get a big surprise: Ben sings, and plays piano. He’s not Van Cliburn, but he’s up there playing chords realistically. He’s also belting out the very funny songs sung by his character, Artie Shaughnessey without embarrassing himself it all.

On Saturday night, Laura Linney caught the show with husband Marc Schauer. It was a Showtime night since Linney is on the network’s “The Big C” because also in the audience was Showtime chief Matt Blank and wife Susan. Also catching the show was Guare himself–rare that a playwright shows up for a performance with guests, but Guare can be confident his 40 year old play is funnier and more tragic than ever. After the show, by the way, the crowds are thick outside waiting for Stiller and co-stars Edie Falco and Jennifer Jason Leigh to emerge from the stage door.

Ben is a late entry for most critics voting this week in various theater awards like the Outer Critics and the Tonys. The list of potential nominees among leading actors for Broadway shows is long, starting with Al Pacino, Robin Williams, Billy Crudup, Bobby Cannavale, Mark Rylance, and James Earl Jones. Heavy stuff.