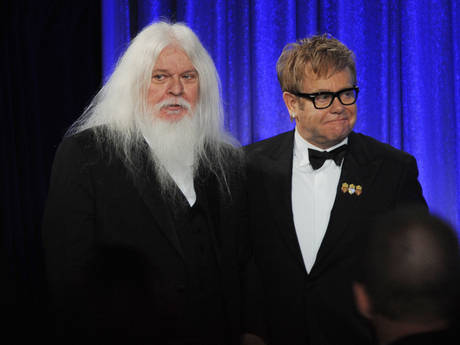 In Cameron Crowe‘s very moving and informational documentary, “The Union,” I learned a lot about both of its subjects, Leon Russell and Elton John. The 10th annual Tribeca Film Festival opened with an outdoor showing of “The Union,” followed by a live set –in the freezing cold–by Sir Elton himself. But wait, in the movie we learned that Leon Russell, rock’s bad boy of the early Seventies, doesn’t know what a “high five” is. “That’s something from sports, isn’t it?”

We also learned that his record company has begged Elton to do a Christmas album or a theme album–like all Motown songs–for years. “I won’t do it,” he says. “That’s not me.” Instead he made “The Union,” my favorite album since it was released last November, with his own hero, Leon Russell. Crowe, director of “Almost Famous” and “Say Anything,” directed it.

And last night it opened the festival on a joyous New York night that was open to the public but had its share of celebrities with people like Scott  Glenn, Griffin Dunne, David O. Russell, Anna Kendrick, Julian Schnabel with Rula Jebreal, the Olsen twins, Lauren Hutton, Bob Balaban, Zoe Kravitz, rock jewelry designer Loree Rodkin (who’s writing a book about her life in Hollywood folks–look out) and the album’s producer, T Bone Burnett. The extra special guest was Bernie Taupin, Elton’s longtime lyricist, and the guy who thought of the term “Crocodile Rock.”

Jane Rosenthal, who started the Film Festival right after September 11, 2001, gave opening remarks and then introduced Martin Scorsese, who got thunderous applause across the plaza behind the World Financial Center in Battery Park Plaza–the same place that was once a landfill and was home to the legendary No Nukes concert of 1979. Rosenthal, husband Craig Hatkoff, and Robert DeNiro gave the area a much needed shot of adrenalin after 9-11. Now it’s packed with office buildings and apartment houses, more popular than ever.

But back to the show: Rosenthal introduced Elton, and after the show he performed two songs from “The Union,” plus “Tiny Dancer,” “Rocket Man,” “Your Song,” and “I Guess That’s Why They Call It the Blues.” He was by himself, playing piano, and sounding way too good for a musician who told the audience: “I’m like a freezing cold lollipop.” Russell, he told us, wasn’t there because he’s on tour in Australia since Elton revived his career. “He’s got a bus, and some money,” Elton said proudly.

PS You’ll be able to see “The Union” soon–my sources say a deal is all but done with HBO, as it should be.