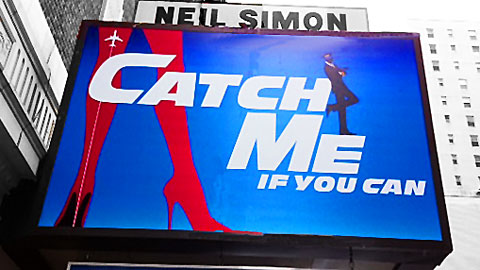 Steven Spielberg is probably a busy guy, but this is his week on Broadway. Last night, a musical version of his film, “Catch Me If You Can,” opened with a star studded premiere and black tie after party gala at the massive former bank vault known as  Cipriani 42nd St. On Thursday night, the British theatrical experience called “War Horse,” opens at Lincoln Center. Spielberg directed the movie version, which opens next winter.

First, though, “Catch Me”: the premiere, it was like, wow. Sarah Jessica Parker and Matthew Broderick brought their eight year old son, James. Other celebs included Shirley Maclaine, Robin Williams, Martin Short, Hugh Jackman, Mira Nair, Joy Behar, Norman Lear, and Ben Vereen. Frank Abagnale Jr., the man whose story “Catch Me” is, not only came, but spoke on stage at the end of the show, to a cheering crowd, with creators Marc Shaiman and Terence McNally. Best party of the year, sorry “Book of Mormon.”

And even though the New York Times’s Ben Brantley bent over backwards not to like “Catch Me,” it’s a rollicking, old fashioned fun, enjoyable entertainment. Aaron Tveit, Tom Wopat and particularly Norbert Leo Butz, are all wonderful. The songs are fun and hummable. No one curses, as in “The Book of Mormon.”  It may not be cutting edge, but “Catch Me” is completely endearing, and worth the price of admission.

At the end of the show, composer Marc Shaiman (“Hairspray”) broke down in tears on stage dedicating the opening to the memory of Tony winner Butz’s sister. Teresa Butz and her female fiancee were brutally murdered in their Seattle home in July 2009, while “Catch Me” was having an out of town tryout.

But this incredibly talented actor was in good spirits at Cipriani. He told me: “We’ve been practicing this show for five years!” It shows and Butz will likely be nominated for a Tony as Best Featured Actor or maybe Best Actor in a musical. He could win, too.

As for Spielberg, maybe he’ll show up on Thursday for “War Horse.” I’m told he missed a big Lincoln Center fundraiser last week. “War Horse” comes to New York with a huge marketing budget and quite a provenance, with high expectations. I’ve seen it, and I can tell you it’s pretty amazing. More on “War Horse” this week…