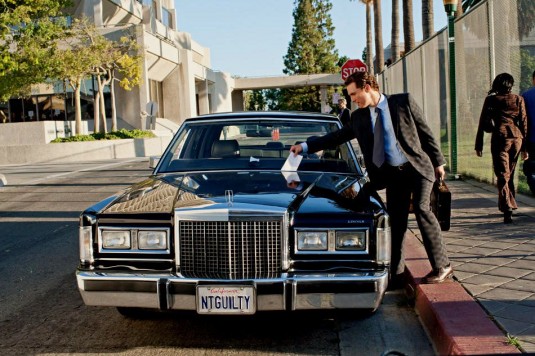 I guess the experiment didn’t work. Even though “The Lincoln Lawyer” sold $6 tickets through Groupon, it still finished in 5th place on Friday — and probably for the weekend. The film took in $4.1 million on Friday. It followed “Limitless,” “Battle: Los Angeles,” “Paul,” and “Rango” in that order. Granted, this is a miserable list of films in a dog like March when NCAA basketball and other diversions like the threat of a new Charlie Sheen video keep people away from the movie theaters.  But “The Lincoln Lawyer” got decent reviews, and Marisa Tomei is supposedly very good in it. (She is, always.) So I guess, too, that Bradley Cooper has usurped Matthew McConaughey at the box office. As for the others, for “Battle: Los Angeles.” every time I see the poster I start rooting for the aliens. “Rango” dropped quite a bit; it really made all its money in one week. As for “Lincoln,” it’s hard to say how many people used their $6 tickets on opening night, but you’d have to think most of the Groupon holders went last night or will go tonight. So that means something–either the discounted ticket didn’t help the box office, or attendance was really really bad. What it really did was send a signal that the movie wasn’t good and had to be assisted. Movies are not like CDs. They’re not the same kind of commodity. Lesson learned perhaps.