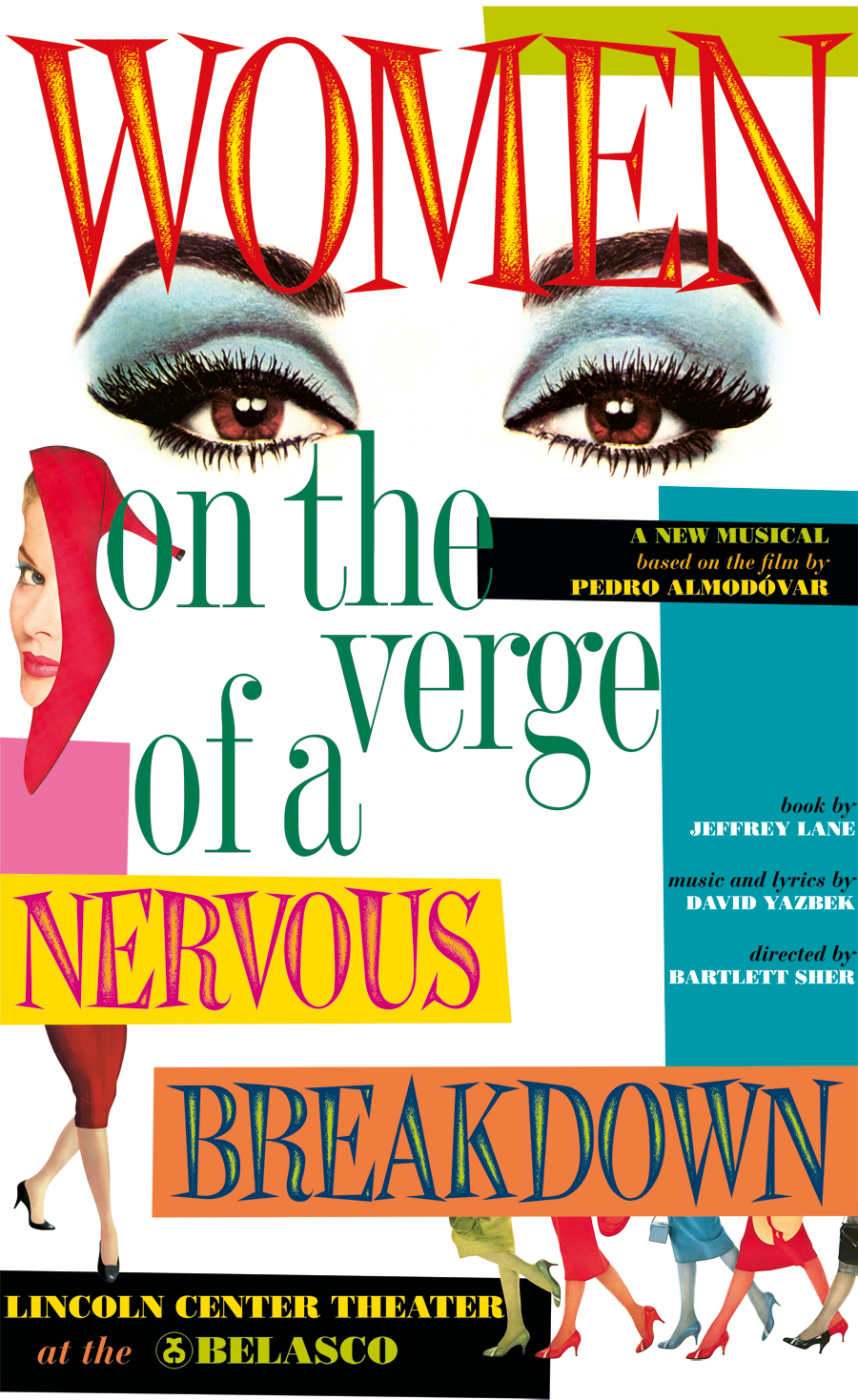 “Women on the Verge of a Nervous Breakdown” is based on Pedro Almodovar’s great movie.It’s staged by Bartlett Sher, who’s a great director, and written by a bunch of people who’d be better off staying out of it–David Yazbek included.

On the stage curtain before the show begins, there’s a recipe for Gazpacho. Famously from the film, gazpacho laced with valium is a plot device later on.

Almodovar is Spanish, and the movie takes place in Madrid. So it only makes sense that no one who worked on this show is remotely Spanish, Latin, or Hispanic. Instead, we get four big, miscast Broadway stars: Patti Lupone, Brian Stokes Mitchell, Laura Benanti, and Sherie Rene Scott, as well as Mary Beth Peil, Danny Burstein, and Justin Guarini from the first season of “American Idol.” (Remember “Kelly and Justin”?)

They all try valiantly to rescue this piece of sludge, a show that is so mis-organized that it’s almost like an SAT test to try and re-order the scenes to make the show make sense. Unfortunately, even Patti LuPone can’t do it. None of the stars have proper entrances, but then again, there are no set up scenes or anything to define what we’re seeing on stage. Only Laura Benanti breathes any life into her songs or scenes, but that’s because they’re actually written for her.

Imagine that a show can go by 45 minutes before any of these stars really has a scene or a song. Only Sherie Renee Scott is featured up to that point, as well as Burstein as a cab driver. The production has instead spent a massive amount of time and money on an actual taxi cab set on a complex track, as well as a motorcycle, and video backdrops (instead of sets) in case a young audience might be bored by stationary props.

No one involved in this seemed to have rethought the movie for the stage. So Brian Stokes Mitchell’s Ivan, the man all the women are having nervous breakdowns over, is never established. He’s a cipher even after he makes his delayed entrance. LuPone does as much as she can with Lucia, Ivan’s ex and mother of his children. But she’s a cardboard cut out, again, not established. Lucia sort of backs into the show.

I like Sherie Rene Scott, but she’s not Spanish. Sorry. They’ve made her look like Carmen Maura, the great star of the movie. But really, New York is full of Latina actresses. They couldn’t find one to play Pepa? (Karen Olivo, maybe, although she might too young. Pepa proudly announces she’s 42.)

And then there are the songs. Oy! With the exception of Benanti’s “Model Behavior” show stopper, and LuPone’s attempt at one (the director kind of aborts her “Time Stands Still” just as it’s taking off), the songs do nothing for the show or the characters. They are songs without melodies, hooks, or choruses. It’s very frustrating.

Pedro Almodovar writes in Playbill that Madrid in 1987 was a big party, that Spain — enjoying democracy — was hedonistic. On Broadway, Madrid of this musical is quite the opposite. It’s like a long night in a fly over state, where the gazpacho comes out of a can.

But who knows? “The Addams Family” is atrocious, and it’s a hit, still playing. These days, anything can happen.