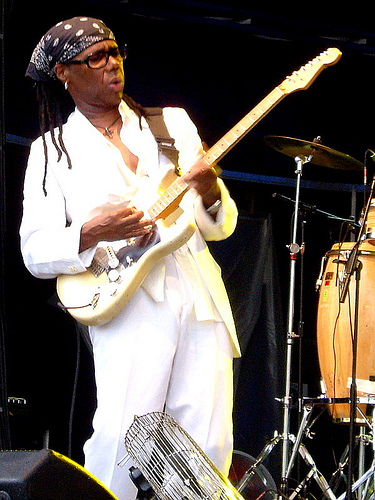 NIle Rodgers, the man behind Chic, is on the ballot for the Songwriters Hall of Fame this year. Like Leon Russell, I think he will get in. You can’t go anywhere in the world for ten minutes without hearing Nile’s hits include “We Are Family,” “Le Freak,” and “Good Times.”

Next week, October 26th, Nile and his partner Nancy Hunt throw their annual “We Are Family Foundation” benefit. The couple started WAFF right after 9-11. Within two weeks they’d put together a big singalong of “We Are Family” with Patti Labelle, Diana Ross, Phoebe Snow, and a gazillion stars.

Now the We Are Family Foundation is a certified hit, sponsoring tolerance courses and building schools in Africa. They’ve even produced a movie called “Striking a Chord,” about music therapy and education, featured at the Hamptons Film Festival.

On the 26th, they’re honoring Jackson Browne. (Hey Jackson: some of us would like to hear “Here Come Those Tears Again.” Hint, hint.) He’s performing, as are Chic and Patti Austin. If there are tickets still available, check out http://www.wearefamilyfoundation.org

Big news from my favorite city other than New York: Marvell Thomas, the famed keyboardist, is getting a “note” on the Memphis Walk of Fame. (It’s like a star, only better!) Marvell is from the dynastic Memphis family of legendary Rufus Thomas (“Walking the Dog”). His sisters are the famed Carla Thomas (“Gee Whiz,” “B-A-B-Y Baby)” and Vaneese Thomas. Marvell, who is not that old, played keyboards on almost every classic Stax hit. He’s still playing, and is also a Grammy “governor.” The ceremony takes place February 19th, 2011. Sweet! PS None of the Thomases are in the Rock and Roll Hall of Fame… About a dozen brass notes are installed during the year. Also on the list for 2011-2012 are our old pal, William Bell (“You Don’t Miss Your Water”), Koko Taylor, and Maurice and Verdine White of Earth, Wind & Fire…