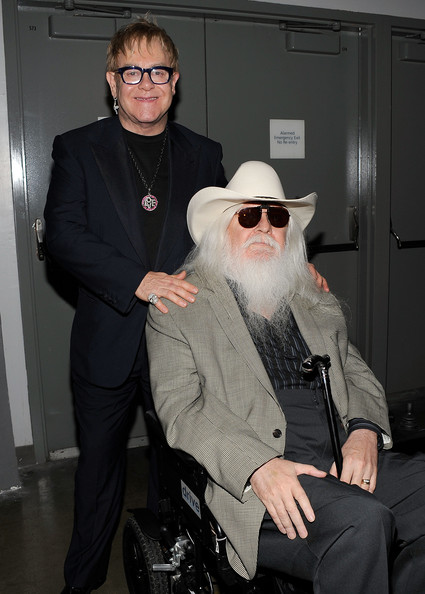 It looks like Dreamworks founder Jeffrey Katzenberg is going to have a lively lunch with Anderson Cooper.

Before the auction Cooper joked that the winner of the date wouldn’t get much “action” on a first date.

The crowd at Cipriani Wall Street–decked out in jewels and black tie–loved the joking around. They raised millions more for the charity. In the crowd were David Furnish, who puts the whole thing together and is quite amazing; Joanne Woodward; Tony Bennett; Hugh Jackman and wife Debra Lee Furness; Clive Davis; Nikki Haskell; “Gossip Girl” star Matthew Settle; Lorraine Bracco; Kevin Zegers; director Baz Luhrmann and costume designer wife Catherine Martin; Donna Karan; Bill and Tani Austin of the Starkey Hearing Foundation; and lots of well heeled fans who came to hear Elton put on a 45 minute solo acoustic set on piano with Leon Russell as a guest star.

And they got what they wanted: Elton dedicated “Don’t Let the Sun Go Down on Me” to the legendary Woodward, who he said he’d never met but always admired. The rest of the set was vintage Elton. He rocked the gigantic marble former bank with: “Sixty Years On” and “The Greatest Discovery” from his debut album–40th anniversary next month. “It feels like 40 minutes,” Elton said. And then: “Levon,” “Tiny Dancer,” “Philadelphia Freedom.” He played “When Love Is Dying,” an instant classic from the new album. All on piano, by himself, simply spectacular.

Then Sir Elton introduced Russell, calling him “my hero” and “my idol.” Russell sat down at the piano and played a little bit of “Amazing Grace,” and then a full version of the most celebrated song he’s written, “A Song For You.” Russell’s white hair is like spun silk or cotton candy.  It seemed electrified and flew around a bit in the light. Leon Russell has never been so appreciated.

Last night, as tonight at the Beacon Theater, Cameron Crowe is filming for some kind of documentary. And tonight’s show, with Elton and Leon debuting their extraordinary album, “The Union,” is going to be the hottest ticket anywhere.