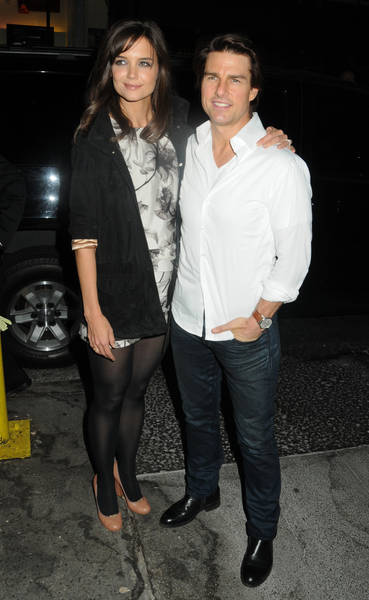 Katie Holmes’s ascent as a movie star isn’t going too well. Her latest wrapped film, “Don’t Be Afraid of the Dark,” is in limbo with the newest version of Miramax as they try to get organized under Neverland Ranch co-owner Tom Barrack.

It’s not like Barrack is in any rush to capitalize on Katie’s draw.
Holmes’ total box office take for this year comes to roughly $550,000–and that’s for two movies.

What makes “The Romantics” even more of a flop is that its cast had name brand recognition: Josh Duhamel, formerly of “Vegas” and “All My Children,” and now in the number 2 film of the week, “Life as We Know It,” was Katie’s costar. Elijah Wood and Anna Paquin are also in the film.

But “The Romantics” was a bust coming out of Sundance. No name distributors wanted it, so Ron Stein’s Four of a Kind Productions, which also made “The Kids Are All Right,” self-disributed. And that rarely works out well.

Before Holmes hooked up with Tom Cruise in their strange and sudden courtship of April 2005, she was on track for a movie career. Holmes appeared to good notices in “Pieces of April.” Then she had sizeable roles in “Batman Begins” and “Thank You for Smoking.” In early April 2005 I met her at a Broadway opening. She’d just moved to New York and was all set to become something.

Marrying Cruise was a great pr move, but hasn’t done much for her career. She mysteriously opted not to do the Batman sequel, which turned out to be “The Dark Knight.” She made the miserable “Mad Money,” a mostly unwatchable female heist film. On Broadway, she was stilted in a small role in a revival of Arthur Miller’s “All My Sons.” And now, 2010 has seen her in two releases that will go to DVD faster than “Dawson’s Creek.”

Her next big move: playing Jackie Kennedy in one episode of a series about the Kennedy family for…HBO? Showtime? No: the History Channel.