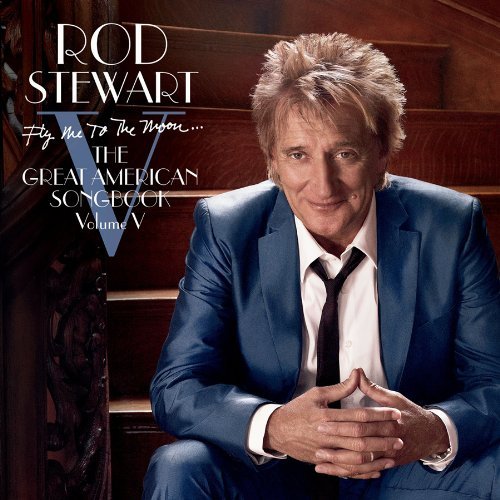 About ten years ago, famed producer Richard Perry played me some tracks he was working on in secret with Rod Stewart. Those tracks became half of the first Stewart “Song Book” album. (Phil Ramone produced the other half.) You could say a Frankenstein was created. More cover albums, all hits, right through a rendition of missed songs from the 70s in 2007. And like a copy of a copy, the albums faded until Stewart’s persona was almost gone.

So it’s good news: Perry is back with Rod. Their “Fly Me to the Moon”–the newest “Songbook”–gets Stewart back to the original plan from a decade ago. Perry hadn’t worked on a “Songbook” album since around 2003, so the time was right. Don’t forget, he’s pretty much the single most successful top 40 producer ever of quality music. He did all the big hits from Carly Simon, Ringo Starr, the Pointer Sisters, you name it. His Harry Nilsson albums–particularly the hit “Without You”–are colossal achievements. Simon’s “You’re So Vain” gets better and better after 38 years.

Arista is releasing “Fly Me to the Moon” tomorrow on vinyl to make the Grammy deadline on Thursday. The CDs and full album downloads come early next month. I heard the tracks just before they were finalized about a month ago. Perry has revived Rod from a coma. It’s a miracle. Stewart sounds energized and excited. His phrasing is back. He’s engaged in the music. And Perry has chosen a group of songs that suit the singer to a ‘t.’ Songs that we know–some from Sinatra– get a whole new life, from “I’ve Got You Under My Skin” to “I Get a Kick Out of You.”

But I really enjoyed some songs that are less well known now: “My Foolish Heart” and “Love Me Or Leave Me.” There are also neat versions of “September in the Rain” and Bobby Darin‘s “Beyond the Sea.”  No one knows how to orchestrate and produce like Perry. Rod hasn’t sounded this good in years and years. No, it’s not “Maggie May.” But Rod’s done that. And with “Fly Me to the Moon,” it does sound like he’s made a graceful transition to a new phase.