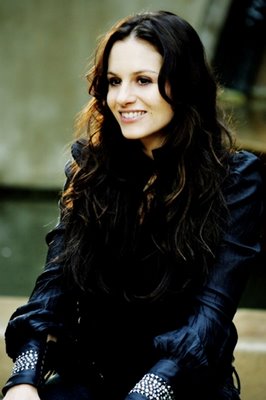 Say goodbye to Kara DioGuardi. Fox has sent out a press release saying she’s “stepping down” from her judgeship. We know she was fired, but heck, whatever.

DioGuardi will continue to have a great career as songwriter-producer.

Meanwhile, even though press reports keep insisting on Jennifer Lopez and Steven Tyler as the new judges to sit around Randy Jackson, I wouldn’t bet the farm on it. Sources tell me nothing has been decided, and that no one has told Jackson anything. “He was never even told about Kara,” says a source. Calls to Jackson were not were not returned. But the word is that he was not informed of DioGuardi’s official departure. And he knows as little as we do about who his fellow judges might be.

Jackson will remain with the show, however. “He has a contract,” says a source.

But every name is still in motion with executive producer Nigel Lythgoe. Remember Lythgoe told me in February that he wanted Elton John.

“He’s not going to get him,” says a source. Chris Isaak‘s name is still in the mix. Frankly, they’d be better off getting Gene Simmons, someone who has nothing to lose by being hard on the contestants. Tyler and Lopez will be hard pressed to make fun of people who are their fans in real life.

Lythgoe has two weeks or less to make his final decisions.

And this: there’s still a persistent rumor that Paula Abdul is being talked to endlessly about coming back. It’s hard to since she has a contract with CBS.