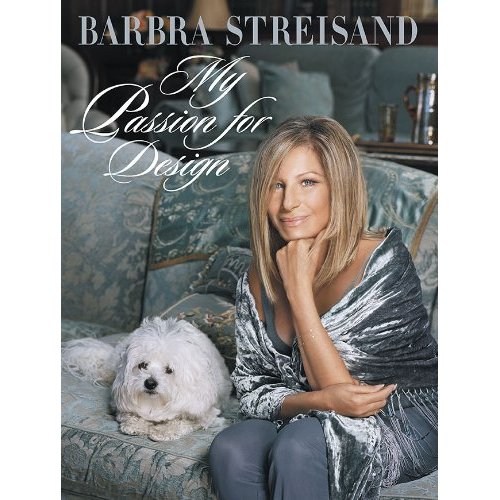 Barbra Streisand is directing her first movie in what seems like ages. No, it’s not “The Normal Heart.”  It seems she may have lost the chance to make that since now Ryan Murphy of “Eat Pray Love” is said to be working on it.

No, Barbra is making a film of her great passion–her homes, art, and design. The DVD will be included in her book, “My Passion for Design,” which will be published in November by Viking. (Note to Barbra: hire your own publicist for this blockbuster. Book flacks are too overwhelmed to do this kind of project.)

How do we know all this? Why, our pal Leah Sydney talked to James Brolin at the Los Angeles premiere of “The Tillman Story” last week–this is the documentary you must see, about the cover up of NFL star Pat Tillman’s death in Afghanistan.

Streisand was absent from the premiere. Brolin said, “She has a deadline on a book. She’s making a film that’s included in the volume of the book. She’s doing color correction and cutting because Viking is saying we need it tomorrow.  175,000 first printing for a table top book-so it’s a big deal.”

“It’s about all her expertise on architecture and precious museum pieces. She used to buy things when she was 14 and not know why-because they were pretty. Twenty years later when they would tell her that that thing that you bought for $200  is worth $25,000 or $200,000 she began to become a museum expert herself and learn why everything was valuable.   We all know she all has good taste.”

Streisand presented the Best Director award last spring to Kathryn Bigelow for “The Hurt Locker.” It was a nice touch, but the irony couldn’t have been lost on her. The famed singer and actress was a trailblazer for female directors. Hopefully, once the book project is concluded, she’ll get back behind the camera. Barbra, “The White Hotel” is still waiting for you.

In the meantime, I can’t wait to see how Babs has directed the furniture. Some directors (not BS) treat their actors like furniture anyway!

PS Brolin Senior is very proud of son Josh, one of our favorite actors, for narrating and promoting “The Tillman Story.”