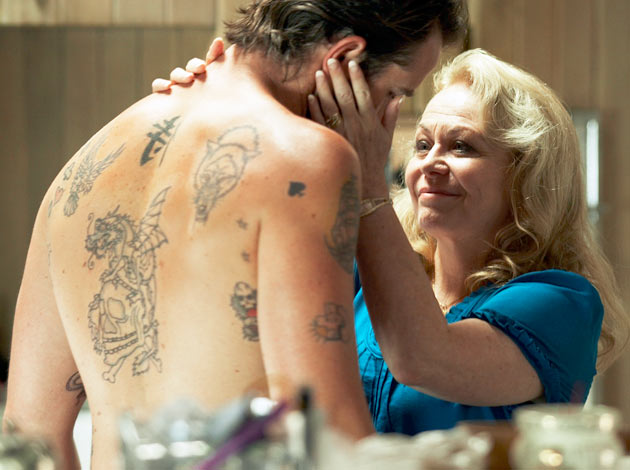 David Michod‘s “Animal Kingdom” opens on Friday the 13th, but it should be lucky: the Tarantino like crime movie was the most exciting film offered at this year’s Sundance Film Festival. (It won the Grand Jury prize.)

Think of it as a Ma Barker and her boys down under. Jacki Weaver is an Australian actress who told me at Sundance she usually plays the “Sally Field” type parts in her country. So she was shocked when she was chosen to play the evil, conniving Janine Cody, mother of a bunch of hoodlums and murderers. I’m telling you, Jacki has got to be seen to be believed. In a crowded field of supporting actresses this year, she’s top of the list.

Then there are her “boys.” James Frecheville, the Channing Tatum of Australia, makes his film debut as 17 year Josh. Young Josh is terrorized by his older brothers and his mom, all of whom want him to join in their psychotic reindeer games.

Michod has cast his gang brilliantly. Ben Mendelsohn is razor sharp as the crazy older brother known as Pope. Joel Edgerton, who appeared in Brooklyn with Cate Blanchett in “Streetcar Named Desire,” is turning into a star.

We’d better watch Michod closely. He also co-wrote “Hesher,” another Sundance film — starring Joseph Gordon Levitt as a psychotic who moves in with a family whom he terrorizes — albeit lovingly. No one over 25 liked “Hesher” at Sundance, which means it must be good.

Michod, who does a little acting of his own, is part of a group of filmmakers called Blue Tongue Films. “It kind of orignated with Edgerton and his brother Nash–who started out as a stunt man. Nash Edgerton had a stunt man friend called Tony Lynch. It wasn’t until those guys started up with me, and Spencer Susser, who directed “Hesher,” we suddenly got quite active in making short films.”

[Editor’s note: He actually did say, on tape, “we got involved in each other’s shorts”– but I decided to leave that out. It was the result of too much coffee and too little sleep.]

Michod doesn’t seem psycho himself and is pretty calm. So why so much violence in his films? “Very few things can enact a shift in a person’s landscape as violence,” he says. “I’ve always loved Spencer’s analogy for Hesher–he’s the embodiment of death.”

As for “Animal Kingdom,” Michod created the story from fiction. There’s no real crime family lurking about in Oz, although he was inspired by a chilling story from the 1980s. “It turned the underworld upside down. Melbourne has a history of crime families. They love being in the newspaper.”

The families have some notable matriarchs. About Jacki Weaver he says, “She’s something of a national treasure back home. She’s much loved in the theater. Next month she’s doing Chekhov with Cate Blanchett and Hugo Weaving.”

The Cody family: “I think they’re fun,” he says with a chuckle. But you won’t have them over for dinner. And what if Hesher moved in with the Codys? Michod laughs: “They’d crush him. What a funny sequel that would be!”