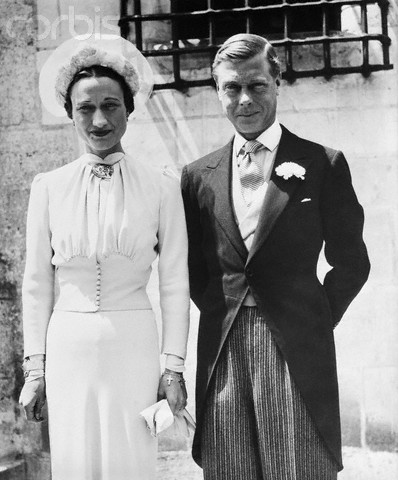 Madonna‘s directing her first feature film in the United Kingdom. The word is, it’s a mess. Are we surprised? “The crew turnover is constant,” says one source. Says another: “The movie may be brilliant, but it’s unlikely anyone working on it will to live to see it finished.”

Madonna is “micro managing everything.” they say. “Everything has to be approved by her. Everything.”

Madonna Louise Ciccone from the Detroit area is now such an Anglophile that she is obsessed with the saga of the Duke and Duchess of Windsor. In case you’ve never seen or read “Edward and Mrs. Simpson,” and haven’t studied this history: King Edward abdicated the throne in order to marry an American commoner, Wallis Simpson. She was already married at the time. Edward’s brother George ascended to the throne, thus setting the stage for the current occupants of Buckingham Palace. Queen Elizabeth is Edward’s niece.

I’ve just read the January draft of “W.E.” which is said to have been revised many times over since then. But the basic premise is still in place. Madonna and Alek Keshishian have written the Windsor story as if it were “Wally and Wallis”–as in “Julie and Julia” — or “The Hours.” The script cuts back and forth between a modern young woman named Wally and the imagined events of the distant past with Wallis Simpson. Eventually they meet–impossibly–as contemporary Wally draws strength from Wallis.

To make matters more stressful, Wally even goes to London and finds Mohammed el-Fayed, the real guy, and convinces him to let her read Wallis Simpson’s letters. (He owns them now.) I don’t know if Mohammed el-Fayed is in the shooting script, but if he is, Madonna is unlikely to be partying with the Queen any time soon. el-Fayed is famously the owner of Harrod’s and father of the late Dodi Fayed, who died with Princess Diana. Queen Elizabeth is well known for her distaste of el-Fayed, to be sure.

“W.E.” is filming now. You can bet Madonna will try and get it into Cannes next May. The waiting, as Tom Petty sings, is the hardest part.