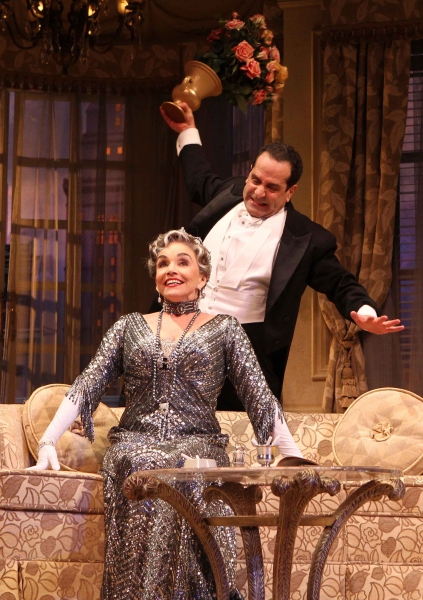 When it opened last spring, Stanley Tucci-directed “Lend Me A Tenor” got lukewarm reviews. I didn’t understand it and still don’t. At Friday night’s packed house, “Lend Me A Tenor” was just as funny and farcical as it was the from beginning. The audience–which included radio legend “Cousin” Bruce Morrow--shrieked with delight.

The cast is still and intact and will be until the run is over. The always amazing Tony Shalhoub is still running the Cleveland Grand Opera; his real life wife Brooke Adams is the opera’s wealthy patron, Julia; usually not so funny Anthony La Paglia— known for serious dramatic roles– is the famous opera singer Morelli. Tony nominee Jan Maxwell kind of steals the show as Morelli’s insanely jealous wife. (Full disclosure: I would pay to see Jan Maxwell do anything.)

The real find of “Lend Me a Tenor” is Justin Bartha, who was in “The Hangover” and some bad movies. He sings, he dances, he pratfalls, he slams doors with the best of them.

“Lend Me A Tenor” ends on August 15th, so hurry over to the Music Box Theater and catch it before it’s gone.