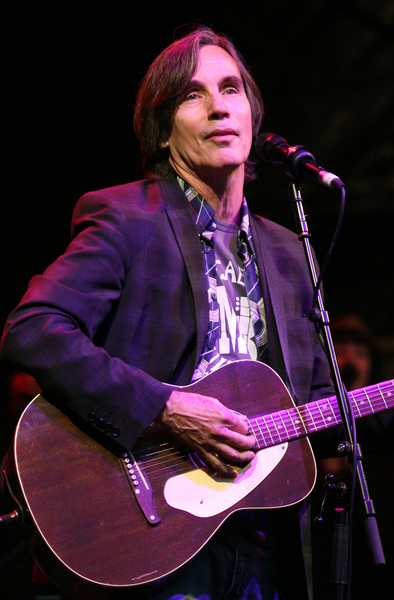 Jackson Browne, on tour, stopped at the Oceana event in Watermill on Saturday night and played a full acoustic set on guitar and keyboards, by himself. The songs included “Running on Empty,” “The Pretender,” “Before the Deluge,” and “Rock Me On the Water.” At the end, he said he no longer cared what people thought about the fact that he’d written the Eagles’ most famous song, “Take It Easy,” and played it.

Oceana is the brainchild of Lois Robbins and Susan Rockefeller, with Keith Addis, designed to raise money for ocean conservancy. Could anything be more timely? Caroline Hirsch, of Caroline’s Comedy Club., is also very involved, as are Ted Danson and Mary Steenburgen. I ran into Charlie Walk, Kathy Schenker, Jane Rose, Fred Davis, John Howard, Jill Brooke, and Jackson’s girlfriend, Dianna Cohen, an artist from L.A. who created a mural for Oceana with recyclable goods and a bunch of schoolkids from Barcelona.

Jackson told me after the show that he’d never heard a famous urban myth about the “Take it Easy” lyrics. For generations the line “I’m looking for a lover who won’t blow my cover” was mis-heard by young rockers as something else. Jackson demurred, and claimed not to know that. I’m a little skeptical. But he’s a serious guy. If you’re too young to know his work, check out his masterpiece album, “Late for the Sky.”

Out in Montauk–where the totally refurbished Panoramic View in Montauk graciously put me up on Friday and Saturday nights– the big stop was at Sean McPherson‘s secret restaurant. the work in progress re-do of The Crow’s Nest. Sean co-owns the Waverly Inn in Greenwich Village.

In Montauk, where he recently moved, he couldn’t find a place to eat. So he bought the old, decrepit Crow’s Nest and started fixing it up. It won’t open for real until next summer. But it’s actually open now. The stars are pouring in. On Sunday night Jerry O’Connell and Rebecca Romajn rode their bikes over from Lake Montauk and acted like they were on a third date. They left their one and a half year old twin girls with the grandparents. Jerry is working on the new CBS series, “The Defenders.” Rebecca told me she’s busy raising the kids. No nannies? I asked. Are they really a Hollywood couple? “We tried to shake those kids off,” Jerry laughed. “But they keep coming back!” A funny, charming couple. And Crow’s Nest? Best new place from East Hampton to Montauk Point.

Meantime, the Panoramic is trying to get the word out about 21 new amazing duplex oceanfront condos that are now neighboring the homes of Robert DeNiro, Ralph Lauren, and Jann Wenner, hard by Guerney’s Inn. New owners have refashioned this gem of a resort and the results are staggering. Over 100 people– including two Real Housewives of New York– showed in the rain on Saturday to see a model condo that sells for $6.5 million.

The Panoramic has unique status in Montauk because of its age–the homes are right on the ocean, closer than any new construction is allowed now. The hotel also has a beautiful pool set into the cliff side with stunning views of the Atlantic Ocean. The A list is already discovering the Panoramic –-Stephanie Seymour was there all weekend with her kids. By the time you read this, more stars will be crowding the pool and taking up chaise longues at the private beach. http://tinyurl.com/2ee4t5u