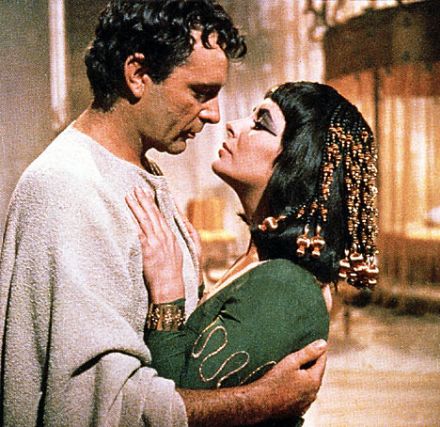 Elizabeth Taylor has revealed for the first time her love letters from Richard Burton. They’re in the new issue of Vanity Fair.

I can only imagine what VF had to pony up for the historic papers between the two superstars of the 60s and 70s. Liz and Dick were Brangelina-plus. No couple was ever bigger in the celebrity world. (Imagine what the supermarket tabloids of 2010 would do to them! Wow!)

It’s the second time in a few months that editor Graydon Carter has put nostalgia on the cover instead of a current movie star. What does that tell us about our current culture? In the spring his Grace Kelly cover was a monster hit.

Taylor reveals to VF that days before he died Burton sent her a letter saying he wanted her back. The letter was mailed on August 2, 1984, three days before his death. Taylor didn’t receive it until she returned to her Los Angeles home from Burton’s memorial service. She keeps it in her bedside table. It was the one letter that she didn’t show to VF but she read it to the magazine’s editors. (He was not unhappy, the author say he wrote to Taylor, but he had been happiest with her. No one else could know what their lives had been together. Was it possible? Could there be another chance? For him? For them? Burton’s widow will be thrilled, no doubt, to hear this.)

All the letters come a soon to be published book called “Furious Love: Elizabeth Taylor, Richard Burton, and the Marriage of the Century.”

Taylor reveals that when news of her affair with Burton broke, she awoke one night to her then husband Eddie Fisher pointing a gun at her head. That’s when she gathered her kids and took off. (Carrie Fisher will no doubt have something funny to say about this–maybe she can add it to her great one woman show!)

Burton’s letters are typically dramatic and purple in their prose. But he does tell Liz about a misunderstanding: “You must know, of course, how much I love you. You must know, of course, how badly I treat you. But the fundamental and most vicious, swinish, murderous, and unchangeable fact is that we totally misunderstand each other … we operate on alien wavelengths. You are as distant as Venus—planet, I mean—and I am tone-deaf to the music of the spheres. But how-so-be-it nevertheless. (A cliché among Welsh politicians.) I love you and I always will. Come back to me as soon as you can … ”