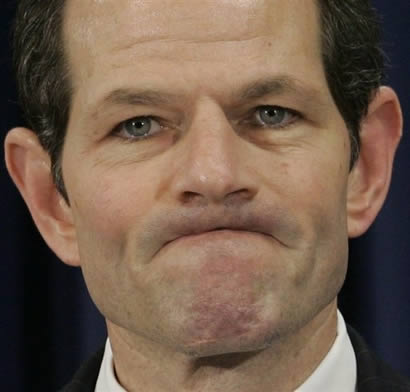 Former New York Governor Eliot Spitzer was not so involved with hooker Ashley Dupre as we’ve been led to believe by the New York Post and other tabloids.

According to a new documentary, called “Client 9,” Spitzer’s steady call girl used the name “Angelina.” (She is played in the doc by actress Wrenn Schmidt.)

Director Alex Gibney has plenty of other revelations in “Client 9.” which debuted at the Tribeca Film Festival last night. In new on camera interviews with Spitzer, he elicits from the disgraced politician an admission. “I brought myself down,” Spitzer says in response to Gibney’s suggestion that it was the governor’s enemies who conspired against him.

The sure found it.

Among those who make rare and candid appearnaces in “Client 9” are AIG’s Maurice “Hank” Greenberg and financier Kenneth Langone, once head of the New York Stock Exchange. To say that they despise Spitzer is an understatement. They don’t hold much back in their interviews. Of course, Gibney points out that until his sudden demise, Spitzer was on their trail. He anticipated the AIG meltdown of 2008, to no avail. He had his own meltdown to deal with.

“Client 9” is referred to as the “Untitled Eliot Spitzer Film” in the Tribeca schedules. But it’s really called “Client 9: The Rise and Fall of Eliot Spitzer,” the title that appears at the start of this exhaustively researched film. Gibney has covered as many bases as he could, including long and amusing interviews with the head of the escort service that provided Spitzer with his call girls. This woman, Cecil Suwal, acts ditzy but in fact has a better grasp of the situation that you might think. “He could not control himself,” she says of a governor who paid for sex with money orders.

Most interesting for New Yorkers who’ve been inundated by sleazy Ashley Dupre, mascot of the New York Post. It turns out she only encountered Spitzer once, according to Gibney. Her recent blast of publicity, he suggests, is being backed by anti-Spitzer conservative forces who seek to continue his humiliation. This makes some sense since the woman has no obvious talents besides those otherwise employed. Even so, Spitzer shouldn’t get too excited. Despite his desire to re-start his political career, it’s just not going to happen.

By the way, Gibney says Spitzer has not seen the film yet.

PS No thanks to Spitzer, who left us with David Paterson. The most mocked, worst governor in New York history, looks especially bad in the film during (thankfully) silent cameos.