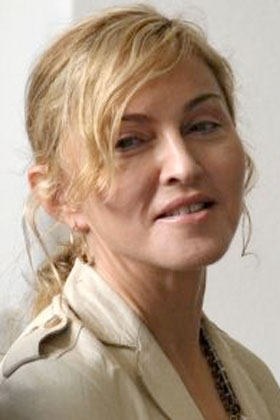 Madonna: the popular entertainer appeared on Jerry Seinfeld’s “The Marriage Ref” last night, with Larry David and Ricky Gervais. The show was a classic, on the level, maybe, of David Susskind’s legendary Mother’s Day special a hundred years ago with Mel Brooks, George Segal and David Steinberg.

For whatever time is left for “The Marriage Ref,” this will be its classic episode.

Madonna revealed that she didn’t have a prenup with Guy Ritchie. That was enough payback for watching the entire episode. She brings it up at around 38 minutes in. And makes a face that gives away the whole story between her and Ritchie. If she’s acting, it’s the best job she’s ever done. But it seems too spontaneous.

What else? The Material Mom, now designing clothes with her teenage daughter, fiddled with her $26 red Kabbalah string. But she was also feisty, funny, and sarcastic. It was the most real she’s ever been on TV, and she was just herself. She hated Larry David and told him so. She indicated that she liked the idea of marriage. She doesn’t care for housepets but warned everyone not to be “Pet-Ist.” She conceded that when “you hook up with someone” you show your best side. The bad stuff comes later.

Larry David also showed off his well-known persona. He hates women and marriage. He’s self centered and wears ugly socks with sneakers. He’s also completely hilarious. He also didn’t care what Madonna thought about anything. And told her so. That must have been a first.

Ricky Gervais was really there to mediate between them. With his soothing British accent and good manners, Gervais always pretends to be shocked by everything weird or lascivious. It works. His favorite word is “lovely.” He likes to hide his head in his hands when he’s mock appalled. You can’t help but love him.

The actual host, Tom Papa, reminded me of Jerry’s old comic nemesis, Kenny Bania, from his sitcom. “The Marriage Ref” is a show created as if Bania finally made it in show business. Papa has a weird, childlike wave. He dismisses each contestant couple, “Let’s say good bye to the [fill in the blank].” The contestants aren’t stupid. By the time they’ve heard the panel (in this case, these three) dissect them, the people look angry. You almost hope they’re actors and not real life dupes.

But Madonna had no pre-nup? That’s the headline. Maybe that’s what Guy Ritchie was discussing last week at a pre-Oscar party at CAA agent Bryan Lourd’s house with none other than Sean Penn. I heard they had their heads together for some time. Oh, to be a fly on that wall. Maybe Sherlock Holmes can get to the bottom of that!