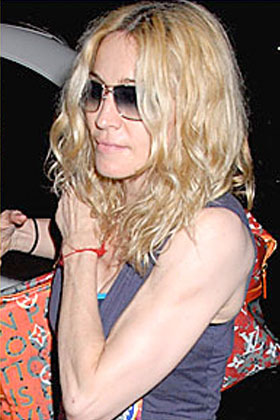 Madonna’s Raising Malawi charity has a paper trail now that leads it right back to the Kabbalah Center cult in Los Angeles.

Kabbalah Centre is the “religion” that charges on its website $26 for a spiritual red string to be worn on the wrist, and $500 for a “special package” of materials to get started in the sect. Madonna actually wore the red string on Jerry Seinfeld’s “The Marriage Ref” last night. (More on that above.)

I’ve said since Raising Malawi first reared its ugly head that it was merely a front for Philip Berg’s Kabbalah Centre. Berg’s son Michael started it, drafted in Madonna, who then went to Malawi and adopted, with much controversy, two children. Malawi does seem like an odd place to bring Kabbalah since the country is very poor. But it’s also a great way to train thousands of new disciples who can go out in the world and sell more red strings.

In February 2008 Madonna got Gucci to help her stage a massive star-studded fundraiser in New York for Raising Malawi. Because the organization had not yet registered as a charity, Gucci had to start its own foundation to collect the $3 million that came in around that time.

Nearly everyone associated with Raising Malawi is also connected to the Kabbalah Center of Los Angeles. The Bergs actually brought Malawi teachers to Los Angeles to learn the expensive Kabbalah “teachings,” then sent them back to inculcate orphans with its Spirituality for Kids curriculum.

The three groups are identified as educational and religious. But under the heading “Identification of Related Organizations as a Partnership,” there is only something called KAF, LLC. Its primary purpose is listed as Real Estate, and KAF LLC has the same address as all the other Kabbalah groups mentioned. Under another heading, “Identification of Related Organizations Taxable as a Corporate Trust,” there is one listing: Kabbalah Enterprises, Inc.

Under Part 1, Section h: “Provide information about the organizations this organization supports” there is one listing only: “Kabbalah Center International, Inc.”

Even more organizations are listed as related: The Kabblah Centres of New York and of Florida; a group called Success for Kids; and the Research Center of Kabbalah. The tax return is signed by, as are all other Kabbalah Centre filings, chief financial officer Yael Avnet.

Phillipe van den Bossche, who ran Raising Malawi until recently, received a salary of approximately $132, 000 in 2008. Another $36.000 went to unspecified salaries.