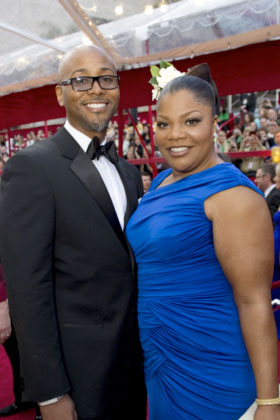 Mo’Nique may have been the first Oscar nominee to bring a bodyguard to the Oscars. He walked her and husband Sidney Hicks up the red carpet. What, exactly, was she afraid of?

“It’s the safest place in the world,” joked an Academy publicist, who shook his head in disbelief.

Yes, Mo’Nique is in a world of her own. She wasn’t seen at the Elton John party or at Vanity Fair.

When someone asked who designed her royal blue dress, the question was referred to the bodyguard. He didn’t know, which was not a surprise. A conference occurred on the red carpet. No definitive answer returned.

But it was good to know the actress and her husband felt safe amidst all those loaned diamonds and rubies!

… Meanwhile, at the Vanity Fair party, Jeremy Renner’s mom and his publicist, Sue Patricola, showed me their loaned diamond watches from Piaget. The stunning sparklers were worth $150,000 apiece. Their only bodyguard was Jeremy…

Back on the red carpet, Pedro Almodovar was excited, and came over to say hello. He was wearing cool sunglasses. “Hello. It’s me, Pedro,” he said.

He said, “Penelope is here with Javier! It’s the first time they’re coming out together.”

It was almost like he was a proud papa. So Almodovar is writing his next film. Alas, so far, there is no role for Penelope Cruz. Dios mio!

…Penelope appeared next on the red carpet, with just her publicist. She was her usual sensational self in a Donna Karan gown. “Where is your boyfriend?” I asked, referring to Javier Bardem. Penelope never before has answered one question about her personal life. But now she and Javier hold hands, go to events together. It’s lovely. And she said, “He’s already inside.”

…Let’s talk about the Lobby Bar, the most popular and populous place during every Academy Award show in years past. There’s an additional, smaller side bar that has an entrance to the stage. Nominated actors and presenters use it for respites and bathroom breaks. The side bar fills up quickly. In the past there’s always been a flat-screen TV in there with poor sound. But people watch the show, and cheer, and mingle.

Not so this year. The TV was removed. A second TV, placed in the lobby for the seat fillers to watch the show, was also removed this year halfway through the show. This meant the only way to monitor the show was on two small screens with no sound, attached to the ceiling on either end of the main bar, high up and not very helpful.

The seat fillers weren’t pleased. They’re volunteers, after all. In the side bar, I ran into former Academy president Frank Pierson, the elegant, white-haired Oscar and Emmy winning writer and director (”Dog Day Afternoon,” “A Star Is Born,” “Mad Men”). He stood where the old screen used to be. We lamented its absence. He said his favorite speech of the night was Mo’Nique’s. “A good speech,” said the Academy veteran, “is when they tell you the obstacles they overcame to get to this point. I don’t need to hear a long list of thank yous.” Frank and his wife Elaine loved “Precious.” Take note Oscar prognosticators: These people are the Academy. Cool, huh? …