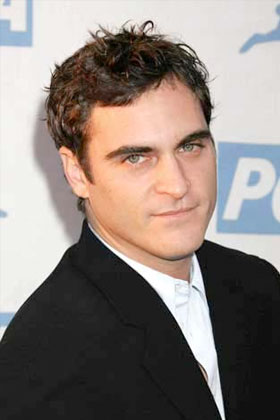 Joaquin Phoenix is back.

On Thursday’night at Soho House I ran into the gifted actor who’s been nominated for Oscars twice–in “Gladiator” and “Walk the Line.”

Joaquin never looked better–clear eyed and clean shaven, a 180 degree turnaround from his digression into rapping and riffing last year on talk shows.

He told me with certainty that he will likely return to acting now after a relatively short break. He’s just hoping to read some good scripts. “Why don’t you write one?” he asked facetiously.

We can’t! We’re too busy scooting around Hollywood looking for scoops!

Phoenix is much missed from the acting scene. Let’s hope it doesn’t take long to find him a good new role.

Meanwhile, Soho House was ablaze with stars last night. The evening’s official purpose was a party given by Elton John (and sponsored by RADD–Rockers Against’Drunk Driving).’That dinner went off without a hitch, with Jane Fonda and Richard Perry, “Avatar” director James Cameron and Suzy Amis, and Elton’s partner David Furnish in the house along with Jennifer Lopez and Marc Anthony, Quentin Tarantino, Dustin Hoffman, and Harvey Weinstein all on the scene.

But soon after dinner’Elton and Furnish vacated the room and it seemed rather sudden. It’s not’known if there’was cause and effect, but none’other than Madonna had’popped up on the’magnificent Soho House terrace’that’s dotted with olive trees brought in from Palm Springs. Later I was told that Elton–who famously does not get along with Madge–made a point of saying hello to her before he left. Elton is classy. Madonna is brassy.

Also in Madonna’s orbit: hit pop songwriter producer Mikkel Eriksen without his partner Tor Erik Hermansen. The pair, as Stargate, provide half the hits were hear these days on pop radio. They’re in town working with Rihanna, and getting ready to do some work for Beyonce. Is Madonna their next client? We shall see.

And so Soho House rolls on. There are lots of other parties in town every night (the Hollywood Reporter had a nice one last night at the home of LA’s stargazing mayor) but Soho House is A List Central this week. The food is great and the chairs are the most comfortable for miles!