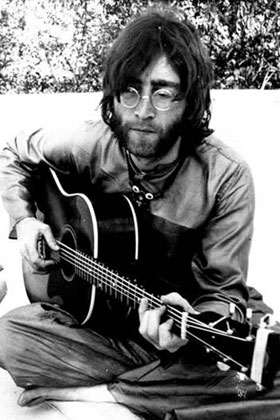 John Lennon or Harry Chapin: Who’s turned out to be more charitable in death?

Lennon, author of hundreds of Beatles songs as well his own gigantic hits? Or beloved New Yorker Harry Chapin, who’s remembered mostly for two songs, “Cat’s in the Cradle” and “Taxi.”

Each singer-songwriter died tragically young. Lennon was 40 when he was murdered in 1980. Chapin died in a car crash at age 38 in 1981.

You’d think it was Lennon, courtesy of widow Yoko Ono. But you’d be wrong.

This came to my attention in a roundabout way over the weekend. Down in Naples, Fla., Yoko is running an art exhibition of John Lennon’s lithographs and other collectible works. The prices run into the thousands of dollars. Apparently it’s a big business. According to the press release, “Ms. Ono signs her husband’s work” since Lennon didn’t foresee what a gold mine he had before he died.

According to the Ono-Lennon release, $2 from each ticket to the exhibition goes to the Harry Chapin Southwest Florida Food Bank.

The latter organization, according to its filings on GuideStar, is impressive. Harry Chapin Southwest Food Bank has over $6 million in assets. It’s one of several food banks with the Long Island singer-songwriter’s name on it. They are all doing good works, including World Hunger Year, Long Island Cares, and the Harry Chapin Foundation.

Ono, on the other hand, is not very charitable — at least according to recorded filings. Her Spirit Foundation has about $1.3 million in assets. In 2007 she gave away just $253,000. The bulk of that went to Foster Plan Japan, which builds schools in Asia and the Far East.’Ono sent’$10,000 apiece to a grade school in Harlem and a women’s domestic crisis center in Portland, Oregon. She also’gave $322 to a British group that promotes Holocaust awareness in England. Unless she’s bypassing her own’foundation, Ono otherwise doesn’t give money either to AIDS groups or Amnesty International, Greenpeace, or any other group you might think John Lennon would have supported.

Tomorrow, Ono resurrects her long dormant but always’dissonant’Plastic Ono Band at the Brooklyn Academy of Music. Tickets range from $39.90 to $150. There is no charity’involved, not even anything for Haiti.