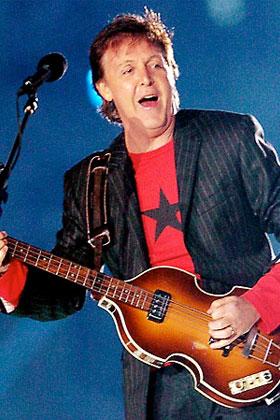 Paul McCartney watched the rehearsals for the Beatles’ “Love” show from Cirque du Soleil and this is one thing he had to say: “We were a great f-ing band.”

This moment is captured in the documentary “All Together Now,” which seems like it was supposed to have come out last fall, did or didn’t, and is being pushed this week. Regardless, I watched it over the weekend, and it’s wonderful. Beatles fans will just eat this up. What a pleasure.

First of all, you get a real sense of the main players involved: George Martin, who deserves a purple heart; his devoted and talented son Giles; McCartney, of course; and Ringo Starr. You also get a real sense of Olivia Harrison, George’s incredibly loyal and devoted widow; and Yoko Ono. And there are the people from Cirque du Soleil: from creators Guy Laliberte and director Dominic Champagne, to a South African dancer who’s struggling to fit in.

Director ‘ yes, this was directed ”Adrian Wills gets short shrift among all these creative geniuses. But he really pulls it together. McCartney is at most his disarmed in this film, a little gobsmacked I think, as he sees the enormity of the Beatles unfold on stage through Champagne’s vision. Ringo is his usual charming self. Yoko One comes off better than you’d think, though she’s not easy on Champagne as the production is getting ready to open. “She hates it,” Champagne says to an associate in French. It doesn’t matter.

The whole “Love” show with Cirque du Soleil came about because of George Harrison. He didn’t get to see the project realized. Instead, Olivia and their son Dhani played a big backstage role in bringing “Love” to fruition. Olivia is on camera quite a bit, and she makes the most sense as she and Yoko ‘ thrown together in their joint widowhood ‘ are often together.

“All Together Now” answers quite a few questions too: the whole father-son relationship between George Martin ‘ who’s 84 years old! ‘ and son Giles, who’s inherited the mantle of protecting the legacy; McCartney’s perspective on having created the body of work; Ringo’s memory of Brian Epstein knocking on his door one day with an offer to join the band; the one new creation in the show ‘ “While My Guitar Gently Weeps” ‘ to which Martin added a new violin score. He reveals that the musicians sent him two dozen roses upon completion. “Usually you just get invoices,” he jokes.

More than anything, you do get a real idea of George Martin’s role as the fifth Beatle (Billy Preston was sixth Beatle then). I loved a little anecdote he and McCartney share about Martin playing a harmonium on some song (”Penny Lane,” maybe) with the Beatles producing and giving him instruction. Their roles were reversed for once.

I was at the opening night of “Love” when all the parties mentioned were guests. I went back about a year later. It’s the best thing in Las Vegas, without a doubt. It’s a shame it can’t be brought to New York, Los Angeles, or London. I think people would be shocked about how extraordinary it is. Seeing “All Together Now” made me want to book a ticket immediately. In the meantime, we have the DVD and the CD, “Love,” which even yours truly ‘ a Beatles purist ‘ loves, loves, loves.

P.S. The documentary is properly dedicated to the memory of Neil Aspinall, who shepherded “Love” and ran the Beatles’ Apple Records for 40 years.