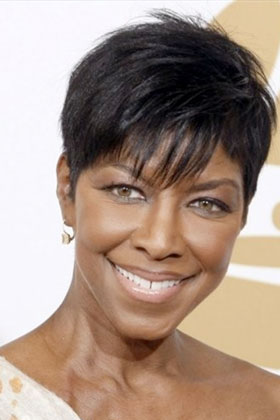 Instead, she’s lived twice as long, and celebrated her 60th birthday on Saturday night with style, grace, and her amazing voice.

The Saturday-night show was the second in a row, and capped a birthday week that included her singing on Quincy Jones‘ remake of “We Are the World” this past Monday. In between, though, Natalie managed to have a little trouble ‘ she fell in her home and broke her elbow. The result was a black sling to go with her slinky black dress.

But elbows aside, Natalie rarely performs in New York, so her appearance was really a treat. (She would have done better to leave her rude corpulent female road manager at home, but that’s another story.) The show was mostly standards, which was just fine. Of course, there was “Unforgettable,” with a video of late dad, the original R&B superstar, Nat “King” Cole.

But Natalie is truly unforgettable. Her voice has more of its lilt and texture than ever. Her father has his place in history. Natalie Cole is one of the few progeny in the popular arts to match if not exceed a famous parent. Whether it’s upbeat material like “Paper Moon” or Charlie Chaplin’s “Smile,” Natalie can turn any standard into her own. She does “Come Rain or Come Shine” not in the melancholy way of Ray Charles, but as the promise that was first offered by Sammy Davis Jr. and Lena Horne. It sounds fresh and new. A revelation from the night: “Better than Anything,” a song she originally sang with Diana Krall. Lovely.

Of course, we love Natalie singing jazz, but the audience came with ulterior motives. “Maybe you remember the R&B Natalie Cole,” the singer said humbly toward the end of the show. Many titles were shouted out, but there was one in particular that everyone wanted: her original 1975 hit, “This Will Be.” “The music will be fine, but we don’t have any singers,” Cole protested. Still, with the audience clapping in time, she did it ‘ with no augmentation or background singers or Auto Tune. Thirty-five years just melted away. We need more Natalie Cole. So many of today’s singers could take lessons from her.

P.S. City Winery is a beautiful space with an excellent sound sytem. Owner Michael Dorf has done a great job with the music, food, and of course, beverages. One caveat: Get rid of the belligerent, brain dead security people. More 12-year-olds with headsets we don’t need, especially when they’re nasty to their elders.