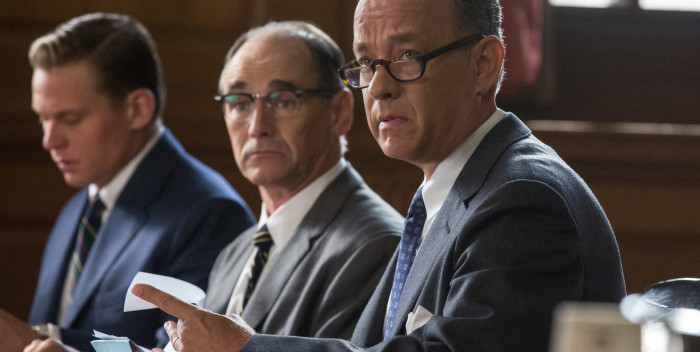 The true Cold War saga of spies and the exchange of Russian Rudolf Abel for Americans Francis Gary Powers and Frederic Pryor is a little lost now in American history. But it was a major story that went on for about five years in newspapers starting in 1962. Now Steven Spielberg has made a stunning film of it with Tom Hanks as James Donovan, the sketchy lawyer who defended first defended Abel then negotiated his swap. Abel is played Mark Rylance, maybe the best theater actor in the world. They are all headed to the Oscars, kids. They’ve made a great movie.

“Bridge of Spies” made its debut at the New York Film Festival last night with a star studded audience: Spielberg, wife Kate Capshaw, many of their kids; Tom Hanks (Rita Wilson had to stay in LA); Rylance and family, not to mention Alan Alda, who plays a crucial role in the film, Sebastian Koch, Billy Magnussen, and a fine supporting cast that includes the wonderful Amy Ryan as Donovan’s wife.

In the audience: Meg Ryan (we shared a laugh about tabloid reports that she’s destitute– she just finished directing her first film), plus Sting and Trudie Styler, Chris Botti, Ed Burns and Christy Turlington, Brian D’Arcy James, writer Nick Pileggi, Joel and Ethan Coen (who polished up and reworked the script– unusual to do an outside project), Joel’s Oscar, Tony and Emmy winning wife Frances McDormand, and Wes Anderson, as well as Bono’s daughter Eve Hewson (who’s in the movie), Nina Dobrev (from the TV vampire thing- gorgeous), Peggy Siegal, and so on.

Marvin Levy, Spielberg’s press agent since 1833, came in from the coast and everyone was happy to see him in New York. Spielberg’s ex wife, actress Amy Irving, was front and center as well. She sat with husband Ken Bowser and Meg Ryan.

Plus, sons and daughters of all the real people involved came, and spoke during a Q&A following the screening at Alice Tully Hall. James Donovan’s daughter praised Tom Hanks for capturing her dad. Hanks sported white-blonde hair under a hat because he’s starting the Sully Sullenberger movie.

From the you can’t believe it department: Nada Bobyleva, a beautiful young actress who has a pivotal role with actor Will Rogers, made it to the party after being denied a ticket to the actual screening. Wait til she’s a big star, Hollywood! She told me she’s just finishing a documentary about returning to Russia to meet her long lost father.

Small world dept: Sting told me that the real Rudolf Abel was not Scottish, as previously thought, but a
Geordie from Sting’s hometown of Newcastle born to Russian parents. “He was a legend there,” Sting said. “He worked in the shipyard.” He’d given Rylance, who’s also British, a little advice on the accent.

I asked Rylance, a most certain Best Supporting Actor nominee, if success would spoil him now. He had a good retort: “I thought I was successful already!” Indeed, he sure is. But Hollywood will embrace him.

We take Tom Hanks for granted. We know him so well. He’s good at everything. His portrayal of James Donovan is among his best work. Spielberg is methodical as he builds this movie’s pace, making it a very American story, a kind of red white and blue salute while still keeping it edgy and tirelessly fascinating. Spielberg-Coens is an interesting combination, kind of sweet and sour. They should do it again.

PS The long saga is condensed to make a two hour movie. Let’s not hear a lot of carping about certain details. The basic story is there, and it’s told very well.