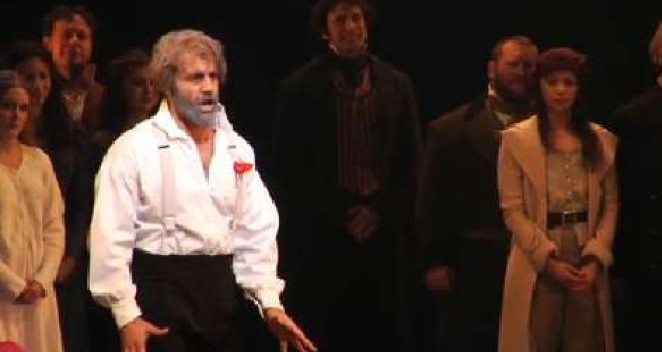 “Les Miz” is back on Broadway, better than ever. Last night the overstuffed Imperial Theater was rocking as Ramin Karimloo–  a big star in London and Toronto– made his Broadway debut as Jean Valjean, Victor Hugo’s tortured hero on the French revolutions.

The cast is bursting with talents–Will Swenson as Javert, Nikki James as Eponine, Keala Settle as Madame Thenardier, and Kyle Scatliffe making his debut– a memorable one– as Enjolas, one of the student fighters. Standing ovations? But of course. For real, though. Producer Cameron Mackintosh, Emperor of “Les Miz” for 27 years plus, told me, “It’s the best ensemble we’ve ever had.”

Karimloo is hot stuff. By the time he finishes “Bring Him Home,” Jean Valjean’s lullaby of a ballad, the audience is eating out of his hand. In London he’s been there before, earning high praise in “Les Miz” and “Phantom” and “Sunset Boulevard’ and so on. He’s had offers to come to Broadway before, but nothing was ever right. And then there’s the matter of travel: Karimloo travels on a Canadian passport. But because his name is Iranian, he says there’s never been a time when his luggage hasn’t been searched.

“Every time I’ve opened my bags, I found the note saying it’s been gone through,” he says. “Every single time.”

Can you imagine Jean Valjean standing for that?

Maybe now that Ramin will be in New York for a long time, he won’t have to worry about that. Karimloo will be in competition for Best Actor in a Musical with, at least, Jefferson Mays from “Gentleman’s Guide,” Andy Karl from “Rocky” and Adam Jacobs from “Aladdin.” He has a good shot at winning, too.

This “Les Miz” is going to find a lot of action in awards season for all those I named above. In the audience last night before the swell party at the Metropolitan Club: Audra McDonald cheering on husband Will Swenson, who brings a very emotional Javert to the stage; original Jean Valjean Colm Wilkinson; the great Norm Lewis, who’s played both Javert and Jean Valjean, and needs to be back on Broadway soon; Neil Patrick Harris, looking skinny from previewing “Hedwig and the Angry Inch,” and Meredith Vieira, who was just having fun.

Keala, nominated last year for “Hands on a Hardbody,” told me she’s already lost over 15 pounds playing the hilarious Madame Thenardier. “It’s the Les Miz diet,” she laughed. “All I do is run around on stage in that heavy costume.”

As for Ramin Karimloo: “After this no more musicals. And nothing dark. I want to try comedy!”