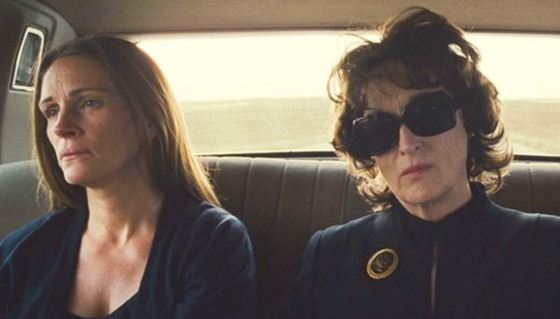 Toronto: The movie adaptation of “August: Osage County” received a rare 10 minute standing ovation last night at Roy  Thomson Hall. The film of Tracey Letts’ Pulitzer Prize winning play stars Meryl Streep as Violet, matriarch a volatile Oklahoma family. The ovation was like something from the Cannes film festival, not usually seen in restrained Canada, and was very disarming for everyone in the cast who was in attendance including Julia Roberts

I know, every time Streep is in a movie people say “Oscar.” But the three time Oscar winner weaves some kind of magic in this movie. You can see it from the moment she appears in half light, looking haggard with spiky short hair to when she pulls on a full, dark wig to play Violet, the pill popping cancer patient with loads of secrets. And yes, this is a comedy and a drama.

Streep was not at last night’s premiere because she starts filming “Into the Woods” this week and has a bad enough cold that she couldn’t travel up from New York with setting back that production. But her name was heard everywhere as the credits rolled and the lights went up.

Most of the large, talented cast was there however: Ewan McGregor, Julia Roberts, Chris Cooper, Julianne Nicholson, Juliette Lewis, Dermot Mulroney, and Abigail Breslin among them. And when they got to their party at Soho House–the only party of any interest last night in Toronto– pop star Taylor Swift arrived and joined them. That caused mayhem as you can imagine, when Swift and Roberts posed for pictures together with Harvey Weinstein.

“August: Osage County” was a bit of a surprise for many reasons last night. There had been a lot of talk that the film adaptation hadn’t worked out. That may have come from a teaser trailer that made the film look like a Southern comedy played for yucks. There was also a lot of discussion about how to handle Oscar positioning with Streep and Roberts. Who would be considered lead or supporting?

But once John Wells’s movie unfurled, all became clear. Streep is the star, the quarterback. In one scene taken from the play she sits at the head of a dining room table with this cast all around her. She literally throws “touchdown passes” to each cast member, landing jokes and barbs as they run to the end zone. It’s sort of mesmerizing because she never flags or tires or misses. It’s like watching an acting master class. It’s breathtaking.

So yes, Meryl Streep jumps onto the Best Actress list with Cate Blanchett, Judi Dench and Sandra Bullock. “AOC” becomes an extremely serious contender for Best Picture. It will almost certainly win Best Ensemble at the SAG Awards. Julia Roberts and Chris Cooper will be up for all the supporting awards. Cooper almost steals the show with a scene right out of Letts’s play at the dinner table. Roberts gives her most soulful performance yet, and comes across with a humanity–as one of Violet’s three daughters–that gives the movie anchor while Streep storms on like a hurricane.