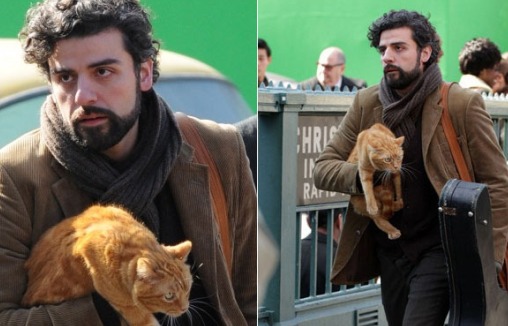 I know we’re all obsessed with our 2012 Oscar films. But one movie is done and ready but won’t be seen officially for some time. I’m told Joel and Ethan Coen screened their pretty much finished “Inside Llewyn Davis” film for family and friends in the last few days. The film is set around 1960 in Greenwich Village, and stars Oscar Isaac as a stand in for real life folk musician Dave von Ronk.

Featured in the film are Carey Mulligan and Justin Timberlake as a couple– but Mulligan’s character is romantically linked to Isaac’s. Timberlake is said to be an old fashioned folkie, a la the Lettermen.

“He’s very clean cut in the movie, and square,” says a viewer. John Goodman plays a druggie. Garrett Hedlund, fresh from “On the Road”–set in the same period–is described as his “valet.”

The film got raves from those who saw it, but it’s also said to be unlike most Coen brothers movies– no violence, no sex, no weird irony.”It made me cry,” says one viewer.

“Inside Llewyn Davis” could possibly go to Cannes next May, where it would screen to get a U.S. distributor. From the sound of things, the film will be in next year’s Oscar mix–just in case you’re wondering, along with “August: Osage County” and a bunch of newcomers. Wow–really– the 2014 Oscar race? I am not ready for that at all!

PS On a separate note, Oscar Isaac is eligible for Best Song this for his own composition, called “Never Had.” It’s from the reunion movie “10 Years.”