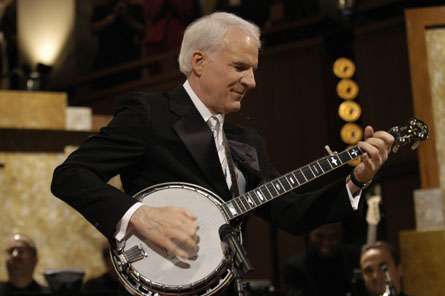 Yes, there was a time when Steve and Eydie referred to the fun, fab married singing duo of Steve Lawrence and Eydie Gorme. But I can tell you exclusively that there’s a NEW Steve and Edie on the scene: comedic actor and musician Steve Martin and singer songwriter Edie Brickell, aka Mrs. Paul Simon. No, the two are not getting together romantically. But Martin and Brickell are recording an album together, combining Martin’s banjo picking and his touring band with Brickell’s famed warbling and songwriting. Brickell, of course, had a few hits including “What I Am”in 1988 before marrying Paul Simon in 1992and having three children. Since then, Brickell has had a spotty career, making albums with Simon’s eldest son Harper Simon (“The Heavy Circles”) and with musician Steve Gadd in the Gaddabouts. Peter Asher is producing the new album with Steve Martin; Simon and Brickell were among the guests at Asher’s final show Saturday night at Feinstein’s at the Regency. Martin and his band will perform in July at the Starkey Hearing Foundation’s annual all star gala in St. Paul, Minnesota. This new grouping a sure thing for a booking on “Saturday Night Live” this fall, which will be a refreshing change of pace.

What? You didn’t know about Edie Brickell? Oh yes: http://www.youtube.com/watch?v=tDl3bdE3YQA