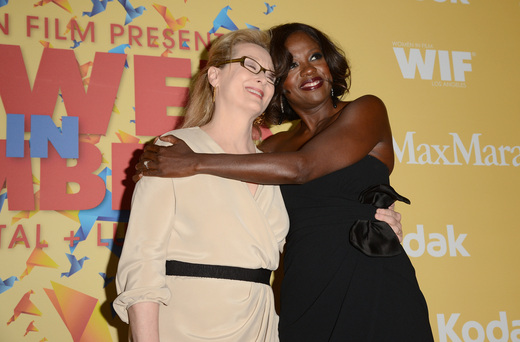 It’s only been three months since Meryl Streep and Viola Davis alternated winning acting awards for “The Iron Lady” and “The Help.” Streep finally won the Oscar for her film, but the two are still big pals. On Tuesday night in LA at the Beverly Hilton, Streep presented Davis with Women in Film’s the Crystal Award for Excellence in film.  Meryl remarked, “My friend Viola was born poor with big dreams and she aimed high, she is a veteran of the battle of the black actor in show business. ”

Davis said, “I believe that the privilege of a lifetime is being who you are.  I’ve spent far too long apologizing for my age, my color and my lack of classical beauty,” to which Meryl, who was standing on the side, chimed in, “your gorgeous Viola!”  Viola then went on to say, “The higher purpose of my life is not to the song and dance or the acclaim,but to rise up, to pull up others and leave the world and industry a better place.”

Women In Film  Crystal + Lucy Awards are always a big deal.  The group’s president Cathy Schulman (producer of “Crash”) told our LEAH SYDNEY :“Women working in Hollywood still have a huge mountain to climb.  One of the things I’m most excited about is that we’ve decided to face the hard statistics about women working in Hollywood.  The hard truth is that we only make up 18 percent of the work force.  WIF is going all out to bring women to 50 percent of the work force.”

Oscar winning guest Marcia Gay Harden told Keah: “I just finished a film at CBS called ‘Get A Job,’ and I may be doing a film with the working title, ‘Librarian’ in Costa Rica by a young director named Juan Feldman.” Would she ever want to work with James Gandolfini again; she did the play ‘God Of Carnage’ with him.  “From your mouth to God’s ear. I just love him.  He’s truly the sweetest man.”

The event featured some of showbiz’s funniest ladies.  Christina Applegate, who was presented with the Norma Zarky Humanitarian Award by her ‘Married With Children,’ screen Dad Ed O’Neill said, “I want to thank Meryl Streep because without her I wouldn’t be here.”  Christina took a beat then said, “Not really, but I just really always wanted to say that.” Christina then went on to recount her struggle with breast cancer which she beat, and about her new organization ‘Right Action for Women.’

Legendary beauty and very astute Diahann Carroll, who got a rousing ovation from the crowd, presented The Lucy Award for Excellence in Television to Bonnie Hammer.  Bonnie said, “I am truly honored to be introduced by such an iconic legend.”

Meryl then went on to bolster Cathy Schulman’s remarks by saying, “We in this room all are familiar with these dreadful statistics.  This despite the fact that recently, 5 movies, all aimed at women, have made over a billion dollars at the box office.  ‘The Help,’ ‘Iron Lady,’ ‘Bridesmaids,’ ‘Mamma Mia,’ and ‘The Devil Wears Prada.’  These films were all profitable because they cost a fraction of all these tent pole failures.”