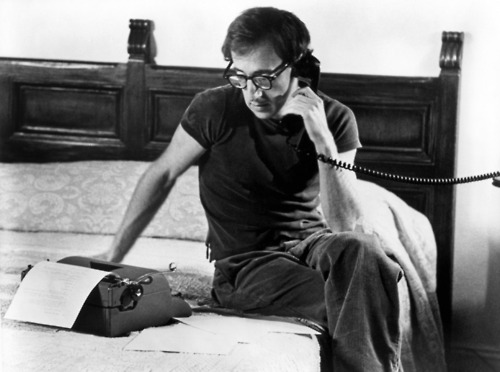 Woody Allen has 14 Best Original Screenplay nominations from the Motion Picture Academy. “Annie Hall” won the Best Picture award from the Oscars. He’s written many books, and dozens of short pieces of fiction, and humor. He’s currently coming off a hit movie, “Midnight in Paris,” his umpteenth original feature since “Take the Money and Run” in the mid 1960s. And all that time, he’s written all of–every last word–on a manual type writer missing its lid. It’s an Olympia portable SM-3, circa late 1950s.

In the excellent new PBS documentary by Robert Weide that airs this Sunday and Monday, Woody shows us his little writing desk, and the culpable typewriter. He never went electric, never went to a word processor, to a computer Mac, PC, or otherwise. What about cut and paste, Weide asks him? And Woody shows us three little miniature staplers and a pair of scissors. “It’s not very sophisticated,” he says humbly. “Annie Hall,” “Match Point,” “Hannah and Her Sisters,” “Mighty Aphrodite”–you name it. This is the way it was done. And on top of that, the early drafts and notes are all in long hand, written on yellow legal pads. It’s kind of mind blowing.

Part 1 of the documentary, which runs Sunday night, is riveting if you were a fan of Allen’s from the early stages of his career. From writing jokes at age 16 for the New York gossip columns to Sid Caesar, stand up comedy, and then tentative film steps with “Bananas,” “Love and Death,” and “Sleeper,” Weide shows Woody’s evolution. It’s great to see Woody’s second wife, and funniest, Louise Lasser, offer her observations about those early days. But it’s meeting Diane Keaton and Tony Roberts, and writer Marshall Brickman, that catalyzes Woody into the career that would explode with “Annie Hall” in 1977. He says he didn’t know the movie had won the Oscar until he awoke the next morning and read it in the New York Times.

Part 1 ends with the release of “Stardust Memories,” a film that disappointed many after “Annie Hall,” “Interiors,” and “Manhattan.” But it has one of my favorite lines of all time–when a fan she says liked the main character’s movie, especially his “early, funny ones.”

There are terrific interviews with Lasser, Brickman, Keaton, Roberts and Woody himself, the most candid and revealing he’s ever been. I can remember what it was like with those films, how people lined up around the Baronet, Coronet, and Beekman theaters on the day a new Woody Allen movie opened. Weide’s documentary does a very good job conveying that time. I also love Martin Scorsese saying that Woody’s New York–the romantic, black and white one of “Manhattan”–is like another planet to him, Scorsese, the creator of “Mean Streets” and “Taxi Driver.” I’m sure the reverse could be said as well.