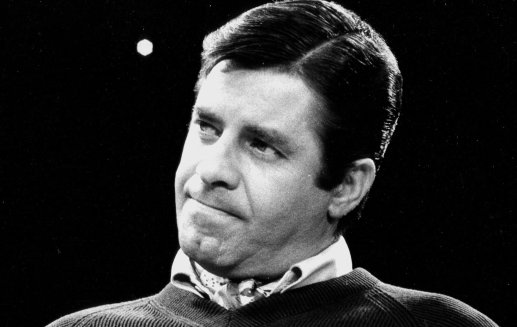 EXCLUSIVE: Jerry Lewis–the Hollywood legend–has been kicked to the curb by the Muscular Dystrophy Association. After 45 years, he’s out as their public face, and the host of their annual TV telethon. Indeed, the telethon itself is pretty much cooked: it’s been reduced to six hours from its traditional twenty one and a half and air just on Sunday night, not even on Labor Day itself. All the drama of staying up overnight, will Jerry make it, will they reach their goal: it’s all over.

What you don’t know is that no one ever told Jerry. And that last fall, after the Labor Day telethon was over, the MDA people made the decisions and never informed Lewis.

Lewis finished last year’s MDA telethon with a flourish. He was 84, and had done the show since 1966. He’d actually been hosting MDA telethons since 1952–fifty eight years, folks, since before he was in the Rat Pack with Dean, Frank, and Sammy!

So it was more than a surprise when in early October the MDA board issued a press release about the following year. Did you miss that press release? So did Lewis. No one told him about it beforehand. And the release didn’t mention his name. It was then that the MDA board signaled they were ditching Lewis, who made awareness of Muscular Dystrophy an international phenomenon.

Here’s the link to it: http://www.mda.org/news/101006telethon-format.html. You’ll notice that Lewis’s name is mentioned only in passing, as a reference to his on camera reunion one year with Dean Martin. Otherwise, it’s like he had nothing to do with MDA or the telethon at all.

Earlier this summer, MDA announced, tersely, that Lewis would not be appearing on this year’s Labor Day telethon. This was after a statement from Jerry in May that this year would be his last.

It’s more than a little dispiriting. Lewis worked like crazy for MDA for most of his life. Many times he had to fight accusations that he was pocketing the dough that came in. The MDA kids became known all over the globe as “Jerry’s Kids”– it was shorthand that built from grassroots efforts. Was he a high maintenance front man? Undoubtedly. But like Sharon Stone with AmFAR, Lewis gave a high profile to a disease and a cause that most people didn’t care about.

The facts: Lewis is not mentioned anywhere on the MDA’s Form 990 tax filing. No salary, no expenses. The head of MDA, a man named Gerald Weinberg, got $373,000 last year. All told, in 2009 MDA disbursed $53.5 million in grants. They claimed $75 million, however, in salaries and other compensation. The top executives earned a total of  about $1.4  million. The main outside consultants reaped a total of $6 million. Again, Lewis’s name doesn’t appear at all.

The one disturbing thing about the MDA’s Form 990: sixteen cash disbursements totaling almost $3 million. There’s no indication where that money went or what it was used for other than, vaguely, “research,” in Europe and Asia. Similar unspecified cash payouts have appeared on previous tax filings.

Now the clock is ticking down to Labor Day weekend. MDA says Lewis will not be on the show, which indeed will run just from 6pm to midnight. When I spoke to him yesterday, Jerry told me: “I can’t talk about it until after Labor Day.” Will he beam himself into the broadcast, like the Green Goblin in “Spider Man”? Frankly, why bother? Jerry Lewis is bigger than MDA. He’s a legend. But it is true, no good deed goes unpunished. And in today’s culture, you’re not rewarded at the end of a great, long run. You’re kicked in the ass. But Lewis knows how many kids and families he helped. And they know it, too.

The whole real MDA Jerry Lewis Labor Day Telethon is over, my friends. In its place will be this sort of lame, lackluster generic show with a bunch of blond commentators who have no history with Las Vegas or entertainment. It’s another sign of the times.