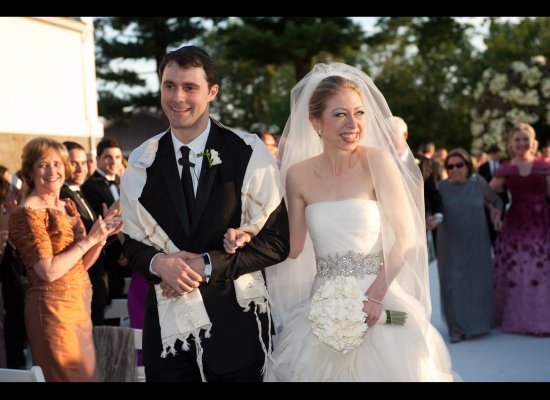 Chelsea Clinton has in-laws now. You wouldn’t know it from the coverage over the weekend. There were no pictures of them and nary a mention of them.

Yet, this much is true: only Marc Mezvinsky‘s mother, former Pennsylvania congresswoman Marjorie Margolies Mezvinsky, walked him down the aisle. The family is still so angry at former Congressman Edward Mezvinsky that he’s on the outs with most of them.  In 2002, Mezvinsky pleaded guilty to 31 counts of fraud. He ripped off friends and family, including his mother in law, for $10 million. His wife divorced him. “Basically,” says a friend, “he stole all her money.”

But there’s been no picture of the groom with his mom coming down the aisle, just Bill and Chelsea.

Marc’s brothers, Andrew and Vu Pham, were his best men. So far, there’s been no name given for Chelsea’s maid of honor. But she had 13 bridesmaids. Marc had 13 groomsmen. Do the math. That’s probably 52 people right there.

The Clintons and Marjorie Mezvinsky each got 100 people to invite. That was it. That total, 200, constituted half the guest list. The other half was chosen by Marc and Chelsea. “They flew in friends from all over the world,” a source tells me. But the parents were restricted, and lived with it. Hence, no Barbra Streisand or Oprah, each of whom were not invited for this very reason.

Marjorie Mezvinsky had 45 family members altogether. Eleven children and sixteen grandchildren. Pictures were taken by the official photographer, but none were released. Marjorie, I’m told, had her dress made to copy something she’d seen during her many trips aboard as a congresswoman and for her foundation.