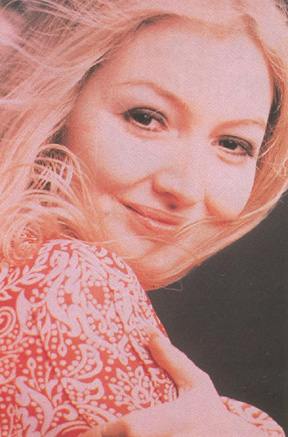 The word around Capitol Records is that they’re about to launch a re-master re-release program for the Beatles’ Apple Records catalog.

Those were the days, my friend. We thought they’d never end. We were wrong.

The last time someone cleaned up and re-released the Apple catalog was back in 1991. Since then, most of the releases have drifted out of print.

Apple Records was not a great success, but it had its shining moments. The catalog consists of James Taylor’s first album ever, plus albums by Badfinger, Billy Preston, R&B great Doris Troy, Mary Hopkin (pictured), and Jackie Lomax.

There are also early solo albums by Ringo Starr and George Harrison that have fallen by the wayside.

Apple’s shiniest moment, for my money, is Badfinger’s “Straight Up” album, produced by Harrison and Todd Rundgren. It’s just perfection–and that’s the name of one of the songs. It also contains the classic hits “Day After Day” and “Baby Blue.” It’s so good, it should be framed.

I will be particularly interested in Doris Troy‘s self titled album. Troy’s biggest hit for Atlantic in the 60s was “Just One Look.” Later she sang, quite beautifully, on Pink Floyd’s “Dark Side of the Moon.”

I am also very curious about Billy Preston‘s “Encouraging Words.” It features Harrison, Eric Clapton, Ginger Baker, Keith Richards and Doris Troy. The same line up is on his “That’s The Way God Planned It.”

And of course, the most enduring of the Apple hits, Mary Hopkin’s “Those Were the Days,” was produced by Paul McCartney, who also wrote Badfinger’s first hit, “Come and Get It.”

Let’s hope the Apple re-release is as clever and classy as the Beatles’ box set boon of last year.