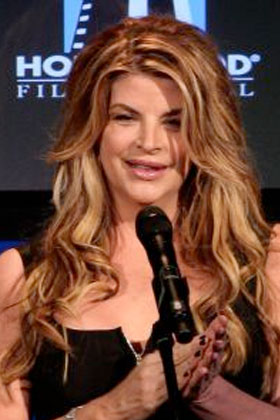 The blogs are alive with speculation that Kirstie Alley’s new diet scheme, called Organic Liaison, is a front for Scientology.

It sure seems that way.

Let’s not forget that Alley is a devoted member of the sect. She fronted a PR pamphlet for them in 2007 called “Keep Scientology Working.”

Another member of the advisory board, Thomas Lovejoy, has a long association with Scientology through its so-called “Artists for Human Rights.” That group includes noted sect members Kelly Preston and Anne Archer. Archer’s son, Tom Davis, is chief celebrity wrangler for Scientology. Preston, of course, is married to Scientology cheerleader John Travolta. Coincidentally, a Tom Lovejoy was one of the earliest teachers of Scientology, way back in 1954. (Click here [PDF download])

Another member of the advisory board, Soram Khalsa, MD, is also considered something of a “quack to the stars.” Khalsa is a Beverly Hills doctor who has a clinic for alternative medicine. According to his bio on Khalsa’s website:’ “In his private medical practice, he integrates phytotherapeutics, homeopathy, acupuncture and environmental medicine with traditional internal medicine.” Here’s a good piece on Khalsa by freelance journalist Alex Pareene.

Oprah Winfrey recently let Alley shill her diet plan on her show. It’s not the first time Winfrey has devoted a massive amount of time to Alley or Scientologists like Cruise and Travolta. It’s certainly a bewilderment.

Even more bewildering: that anyone would sign up to pay money for Alley’s latest weight-loss program. She was a spokesperson for Jenny Craig, lost weight and gained it all back. She is now morbidly obese.