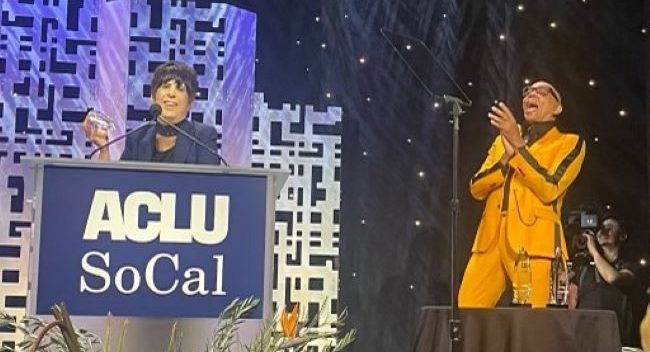 Famed songwriter (and Lifetime Achievement Oscar winner) Diane Warren had a smashing night in Los Angeles last night at the big star studded ACLU dinner. After receiving her Bill of Rights Award on stage, which was made of glass, she promptly dropped it and the award splintered into a lot of pieces.

Warren promptly thanked the ACLU “for this award, this award and this award.” She quipped, “Mazel Tov,” cracking up RuPaul, who’d just handed it to her. Warren riffed on one of her hits, “please Un-Break my award!”

Warren wrote “Un-Break My Heart,” as well as so many other including “If I Could Turn Back Time, ““Because You Loved Me” and so many more classics which were performed by drag queens in a quite the the unusual night for the ACLU, which is more serious minded.  Warren’s songs like “Till It Happens to You” and “Stand Up For Something” are used to advice social justice which is why she deservedly received the award.

Warren handled the situation fast on her feet and had the crowding roaring.  She then spoke about what is closest to her heart besides her music, which is her love of animals.  She explained, “for me, it’s not just human rights, it’s also animal rights.  As a committed animal rights activist, my heart is with that.  I use my voice to do all I can to protect animals. It’s all about the innocents.  They need us to look after them.  Music is the most powerful thing in the world, because it doesn’t go to the brain, it goes to the heart.  There is a lack of kindness in the world right now. So be kind to all living creatures.  This isn’t just our world it’s theirs too.”

The evening’s host, “Grey’s Anatomy” actor Jason George, had the crowd laughing still when he came on stage with a broom and started to clean. Warren joked, “he’s sweeping my award away!”  Nah, Diane. You are multi award winning, have 13 Oscar Nominations, you’re getting an Honorary Oscar on November 19th, and have a talked about song “Applause” that Sofia Carson sings from the film “Tell It Like a Woman.”  So you’re good!

The ACLU also gave the same award out to civil rights lawyer Ahilan Arulanantham and Berlanti Prods. Partners Greg Berlanti and Sarach Schecter.  The awards are designed to shine a spotlight “on those who have meaningfully challenged the status quo.” Congrats to the ACLU for the work they do.  They are much needed and truly valued in these crazy times we live in. Watch Diane Warren’s breaking of the award and her funny, moving speech here: