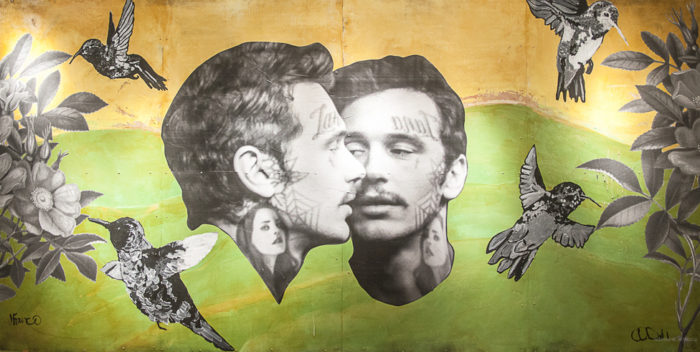 James Franco, pretentious actor-student-teacher-director-author–ex Oscars host– has settled the sexual harassment lawsuit brought by two woman against him. Franco, an Oscar nominee for “127 Hours,” had a once promising career that is now in tatters.

Curiously, Franco had perpetuated a persona of being “maybe gay” by appearing in many films, many of which he directed, that suggested a fluid sexuality. He received kudos for playing Harvey Milk’s lover in “Milk,” then played poet Allen Ginsburg in “Howl,” re-created scenes from the very bad movie “Cruising,” and produced something called “Kink.” He also played a man who disavowed his sexuality to preach against homosexuality in “I Am Michael.”

But it was a cover, and a damn good one. He admitted to Vulture that it was all for show. Franco, in fact, was a lech. There was a public scandal in which he was texting an underage girl. There were other rumblings of trouble. The lawsuit alleged that Franco “sought to create a pipeline of young women who were subjected to his personal and professional sexual exploitation in the name of education.”

The lawsuit said the incidents occurred in a master class on sex scenes that Franco taught at a private acting school Franco and his fellow defendants Vince Jolivette and Jay Davis started called Studio 4, which opened in 2014 and closed in 2017.

Franco, of course, denied everything. But among Tither-Kaplan’s allegations was that claim that Franco allegedly removed plastic guards that had been placed over actors’ genitals while he simulated oral sex.

Will Franco ever direct another movie? It’s unlikely but even people with the worst scandals (see Nate Parker) seem to be able to find financial backers. On the money said, you’d think it was cash thrown away. Franco has made dozens and dozens of films either as producer or director, sometimes with him as star, that were beyond dreadful. The two worst were adaptations of William Faulkner’s “As I Lay Dying” and “The Sound and the Fury,” which not only made no money but are unwatchable. There are plenty more littering amazon.com and the Internet Movie Database, all cringe worthy.