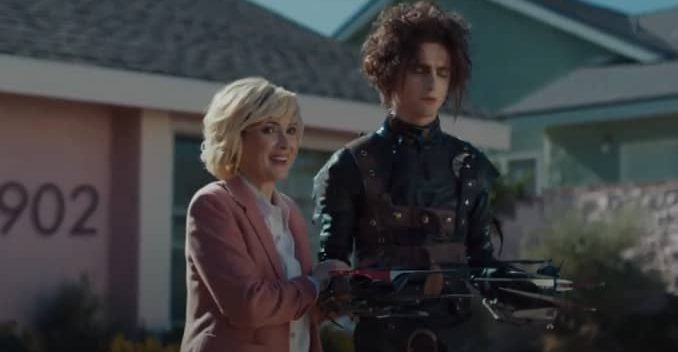 And just like that, Johnny Depp is gone. He’s been replaced as Edward Scissorhands by Timothee Chalamet as his son, Edgar, in a Super Bowl commercial for Cadillac. Winona Ryder, who was in the original film, is back and narrates as Kim from the Tim Burton movie. They were smart to get Burton on their side here. He says in a quote: It’s rare when a work you’re proud of continues to live on and evolve with the times, even after 30 years. I’m glad to see Edgar coping with the new world!” (Burton’s fee or royalty was no doubt substantial.)

Depp is hereby erased. His scandals and lawsuits with ex wife Amber Heard have done him more damage than all the crappy movies he made over the last 20 years. Ironically, his “Lone Ranger” box office bust co-starred Armie Hammer, now eating his heart out that his own career is cooked.

The winner in all this is Winona, who’s had a career Renaissance with “Stranger Things.” She was canceled herself years ago, quite unfairly, and now she’s back. What a nice end to the story.