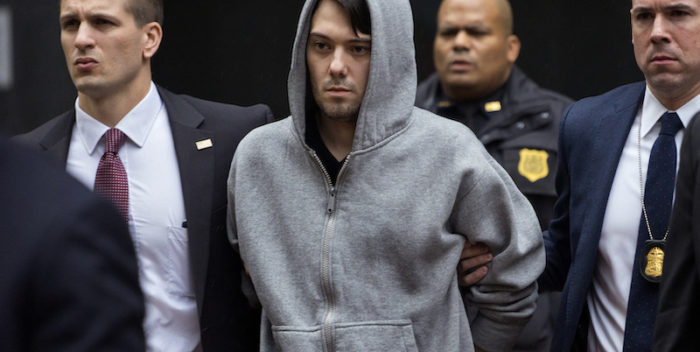 The craziest story I’ve read in some time is by Stephanie Clifford in, of all places, Elle.com.

Clifford writes about a so-called journalist for Bloomberg named Christie Smythe. For six years she covered the trials of Martin Shkreli, the evil miscreant who raised prices for the Epi Pen to insane levels, spent $2 million on a Wu Tang album, and is now serving time in jail.

Smythe, who was married and had a good job, good life, blew it all up because she “fell in love” with Shkreli. And get this: they’ve never actually been together, or had a physical relationship, and he is currently not even speaking to her. But she divorced her husband, ruined her career, and her reputation, all for a man who is loathed by much of the world.

And in the Elle piece, Smythe is styled for fashion, wearing crazy expensive clothes. I’m not a shrink, and I didn’t know her before this, but I’d say she’s lost her mind completely. It’s sad, and frightening.

Among Shkreli’s horrors: he raised the price of a drug called Daraprim, used for a type of parasitic infection that can be life-threatening, by 5,000 percent.

Shkreli was sentenced to seven years in prison on Friday for defrauding investors out of more than $10 million. Shkreli had faced up to 45 years behind bars for mismanaging money at his hedge funds, according to the judge. He’s a con man, a fraudster, a crook.

But Smythe has so lost her mind, she tells Clifford that because she’s given this interview to Elle, Shkreli has dropped her completely. Clifford asked Shkreli about Smythe and he responded through his lawyers: “Mr. Shkreli wishes Ms. Smythe the best of luck in her future endeavors.”

Twitter, meantime, has exploded among media writers, especially women, who can’t believe this happened– also that it took Bloomberg so long to fire Smythe, was totally compromised by her subject. But this sort of thing occurs, I guess. A couple of years ago we learned that Laura Poitras, who made a film about Wikileaks and Julian Assange, had fallen into a relationship during production with one of Assange’s crazier minions. Poitras, who’d won an Oscar the year before for “Citizen Four” about Edward Snowden, immediately lost all credibility.