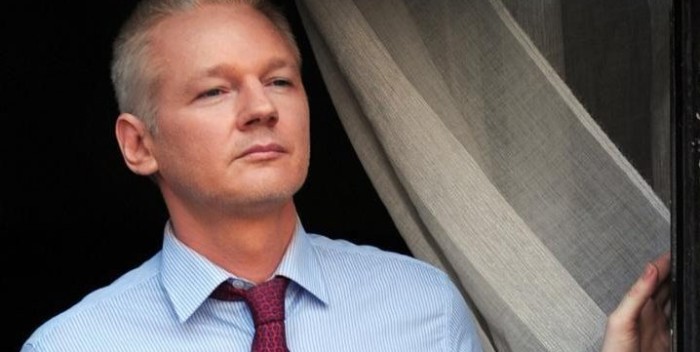 Oscar winner Laura Poitras was already working on a film about WikiLeaks and Julian Assange when news of Edward Snowden broke. She switched gears, made “Citizen Four,” and won the Academy Award.

Last spring in Cannes Poitras showed a version of her Assange movie, “Risk,” which was met with acclaim. We learned a lot from her extraordinary access including that Lady Gaga had randomly turned up and interviewed Assange. “Who’s after you?” she asks rhetorically. Assange rattles off lists and lists of international crime fighting groups from the FBI to Interpol. Gaga observes, “So– a lot of people?”

But Poitras was smart. She sensed that Assange might play a part in the American election already underway. So she waited and watched as he dumped zillions of files about the Democrats and Hillary Clinton, and tried his best to upset the apple cart from his perch in the Ecuadorian embassy in London. He’s now been there five years, unable to leave without risking arrest and prosecution.

Poitras added a voice over, and some facts we didn’t know. Included among them: her access overstepped to the point where she says she had a “brief relationship” with Assange lackey Jacob Applebaum, who is now in exile in Berlin. Applebaum and Assange’s girlfriend, Sarah Harrison, each came to Cannes last year for the big screening. They seemed like Assange’s cult followers. In a word, they were nuts.

After Cannes, it seems like Assange closed the door to Poitras. Her updated film traces his possible connection to the Russians, and weaves in recent revelations about WikiLeaks interference in the election. But there’s no more hanging around in the Embassy. And there’s no reference at all to “Baywatch” star Pam Anderson dropping by for at home dates with Assange.

Still, Poitras’s “Risk” is powerful stuff. Unlike Snowden, Assange is not a sympathetic character. At least Snowden (and Chelsea Manning, who is named checked) is an American who was trying to do something patriotic. Assange comes off as a petulant trouble maker. But you won’t want to miss his escape through London into the Embassy, aided and abetted by his mom. Absolute genius filmmaking.

And what about the damage Assange did to Hillary Clinton? Doesn’t he have similar stuff on Trump? Poitras said after tonight’s Lincoln Center/Walter Reade Theater screening: “I don’t think so. Julian is an equal opportunity leaker. If has stuff, he releases it.”