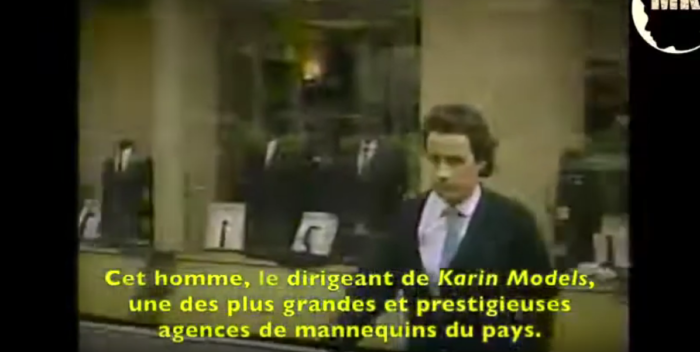 Jean Luc Brunel was finally arrested today, according to reports, as he was trying to fly out of Paris for Senegal. Jeffrey Epstein’s pimp, as he is now known, has a long history of allegedly trafficking in young girls. It only took 30 years to get him.

I wrote about Brunel in the New York Observer in 1991. He was the “silent partner” of Faith Kates and Joel Wilkenfeld when they started Next Modeling Agency in New York after leaving a company called Spectrum Models demolished. The Observer has unfortunately wiped out its old online archives since Jared Kushner took over, but the physical clips of my story exist. I remember it all very well. Wilkenfeld had worked for Rena Rowan, then the wife of Sidney Kimmel– who had a fledgling film company. He bankrolled it. The money came from him owning Jones New York.

At the time a publicist had been hired to promote the Kates-Wilkenfeld venture, and asked me to interview them. When I started doing the reporting, it all came out. And I wasn’t the first to discover Brunel’s history or activities. He’d been profiled scathingly by Diane Sawyer in 1989 for “60 Minutes.” The late great Esther Kartiganer invited to me to the “60 Minutes” offices to view the tape. It was a great help for my story.

Kates and Wilkenfeld denied that they had anything to do with Brunel. But many people associated with them told stories of their deep alliance. This doesn’t mean that they were involved in Brunel’s misdeeds, and I’m not alleging anything besides being in business with him. I remember Kates’s little dog barking at me all through our interview. The dog knew everything. But some young models left the agency based on the stories they’d heard before even I got to this. Bebe Buell pulled her then young daughter, Liv Tyler, from Next immediately.

It’s amazing that Brunel has finally been arrested. I don’t know if statutes of limitation in New York make it impossible to prosecute him here. But the real story of modeling agencies has never really been told.