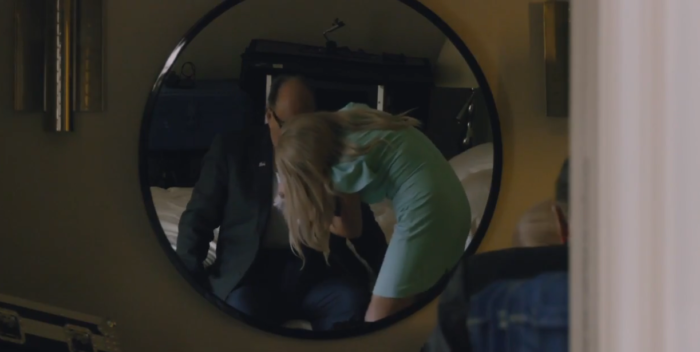 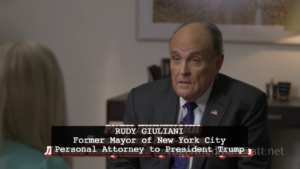 Sacha Baron Cohen has done something to Rudy Giuliani we could only dream of: he’s captured him on film as a dirty old man on the make. In the sequel to Cohen’s 2006 hit comedy, “Borat,” headed to Amazon Prime on Friday, thrice-married and divorced Rudy is filmed attempting to seduce a beautiful young “Russian reporter” in a hotel bedroom. This is real, not a joke. He thinks he’s being filmed for a real interview. Alone with her in the hotel room, he accepts the “reporter”‘s invite into the bedroom for a drink, lies down on the bed, and is clearly headed for what he thinks is a happy ending.

This is real, I must impress upon you. When you’re watching Giuliani in “Borat 2” you’re thinking this is acting isn’t it? But it is not. Giuliani has been totally duped by this pretty young woman who is an actress playing — to the movie audience– Borat’s daughter, Tutar. The point is to reveal the former mayor of New York, President Trump’s personal lawyer, for the lowlife who he is, and it works. Rudy is not in on the joke. He is the joke. 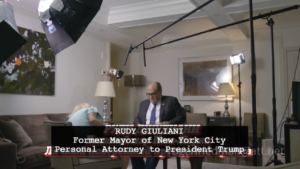 Rudy is lured to a New York hotel (looks like one in Battery Park City maybe) for this interview and Tutar, played by Bulgarian actress Maria Bakalova, gushes over him. At one point Cohen comes into the room posing as a sound man. When he sees Giuliani is infatuated with Tutar, he says, just loud enough to hear, “You should stick to marrying your cousin.” (Giuliani’s first wife was his cousin.) The former mayor shoots him a look but things are moving fast. Plus, it looks like Rudy is drinking a neat Scotch.

Tutar flirts shamelessly and he flirts back. When she says she’s nervous, he says, grinning, “Ill relax you.” As Giuliani coughs– coughs!— he tells her Trump saved at least a million lives from the virus. They discuss where the virus started. “Not with a bat,” he says. “Have you ever eaten a bat?” he asks the reporter. She bats her eyelashes and says she will only do it with him. It’s agreed. She invites Rudy into the bedroom “for a drink.” 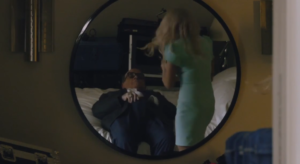 In the bedroom, Tutar (who blossoms from feral animal to sex pot in the course of the film) pushes him down on the bed and starts unbuckling his pants to remove the microphone. It’s quite clear at this point what the intentions are: he thinks they are going to bed. Only Cohen, dressed improbably in a wig and women’s underwear, bursts in and tells Rudy “she’s too old for you, she’s 15!” (Bakalova is at least 23, don’t worry.) Rudy hightails it out of the suite.

It’s a devastating moment that comes at the end of an almost 90 minute comedy that also includes Cohen trying to disrupt a Mike Pence speech at a CPAC meeting, and plenty of other “gotcha” moments. We know Borat, we love him. The last time we saw him was in 2006. It turns out in his fictional world of Kazakhstan he was punished for the first movie’s success. Now he’s sent back to America to improve his country’s public relations. Bakalova’s Tutar hides in a crate and meets him in Texas as part of a mistaken shipment.

Bakalova replaces Borat’s old sidekick, actor Ken Davitian as Azamat. (We do learn Azamat’s fate, and it’s not pretty.) Cohen and Baklova then proceed to set up unwitting fools in Texas, Georgia and other locales, eliciting racist, anti-Semitic and misogynistic comments from them. You do laugh a lot, I laughed a lot, even though it’s shooting fish in a barrel.

To their credit some of the real people rise to the occasion. Alan Smith, who I interviewed yesterday, didn’t know what was going when “Borat” entered his UPS store in suburban Atlanta. But he acquitted himself well. So did baby sitter Jeanise Jones who, if she’s in on the joke deserves a Golden Globe. She plays the whole thing straight when Borat leaves Tutar with her tied to a ball and chain with a dog dish for water. Poor Tutar: she’s the butt of many jokes all to make satirical points, gets a lot of laughs and Bakalova– whoever she is– is a sharp little actress.

The original, hilariously over the top “Borat” was just to make fun, it had no real point. This one, don’t be fooled, has a specific purpose beside being funny (which it is all the time). It’s also arriving at a planned moment. Cohen skewers “McDonald” Trump, Mike Pence, and everything about this election. He goes out of his way to address the Trump administration’s willful ignorance about anti-Semitism. In one scene he visits a synagogue and tries to start trouble. But he winds up a meeting an extraordinary Holocaust survivor, Judith Dim Evans, who sadly died in real life after the taping. Evans’ family tried to stop her inclusion in the film. In a brilliant gesture, Cohen dedicated to the movie to her.

“Borat Subsequent Moviefilm: Delivery of Prodigious Bribe to American Regime for Make Benefit Once Glorious Nation of Kazakhstan” sounds like a lot of work. It isn’t. At the heart of all this is goofy fun, gut laughs, and a lot of silliness. Don’t forget that. We do learn that Borat’s middle name is “Margaret.” And that one of his sons, named Huey Lewis, changed it from “Jeffrey Epstein.” In the end it’s possible that the entire coronavirus outbreak is a scheme by Kazakhstan to get back at America, and they used Borat as a superspreader.

And the real people? There are plenty of them. One of them, a Georgia plastic surgeon, won’t be too happy. A baker in Macon may be embarrassed for writing on a cake, “Jews are not going to replace us.” We’re going to be hearing stories about them for the next couple of weeks. Many “stars” will be born. As for Rudy Giuliani? He can’t explain himself out of this. He’ll never shake this story.