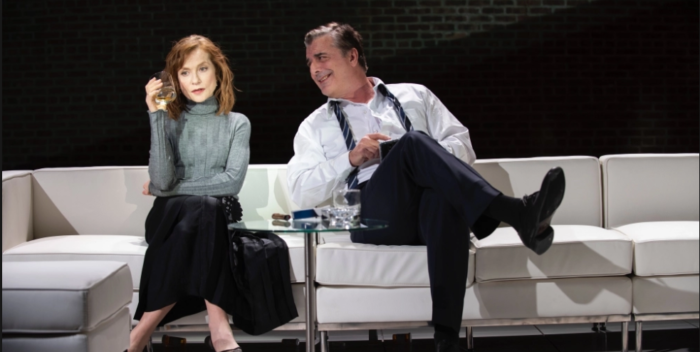 Petite and pretty, Isabelle Huppert plays it edgy. In the 2016 “Elle” — for which she was Oscar nominated and winner of many awards– and this year’s “Greta,” her characters kill with aplomb. Those are just two roles in a prolific film career that also includes the shocking 2001 “The Piano Teacher.” Incest and self-mutilation do not faze her.

Currently in the play, “The Mother, ” at the Atlantic Theater, from Florian Zeller as translated by Christopher Hampton, and under Trip Cullman’s expert direction, she seethes with angst, jealousy, raging at her husband (Chris Noth in that role), repeating rapid fire: “Where were you this afternoon?” even after he’s answered in several ways—the office, at work, a meeting. Perched provocatively on an elongated white couch, a furniture version of an extended limo, reading a book—Marguerite Duras’ “The Lover,” she tells me later– her gaze is down on the page, looking and not looking simultaneously, a chilling portrait of a housewife on the brink.

What’s going on? An empty nester, she’s also wondering about their son Nicholas (Justice Smith), why doesn’t he answer her calls? Why doesn’t he phone? “Well,” says Noth. “He’s living his life.” “You are a very bad person!” she exclaims. Psychic contradictions turned outward, in a Freudian twist: the son attempts to strangle her. Cue Hamlet on Gertrude.

On the night we attended, lightning lurked in the Manhattan sky, and soon a heavy, epic rain pounded on the Linda Gross Theater’s roof. Was hell breaking loose? A voice instructed the actors on stage, Huppert and Odessa Young, playing a nurse among other roles, to exit stage left, and the audience to stay seated. We could not tell, was this a fourth wall break, or a tech mishap? The play resumed, sound system restored. As the rain tapered off, an audience that included the great Brenda Vaccaro, art dealer extraordinaire Larry Gagosian, and a couple who flew in from Paris for a night just to see Huppert in this role, lingered on to congratulate the star. The man said, “She’s worth it.”

PS Are there tickets? Get down there to West 20th St. and find out. You don’t want to miss this one.